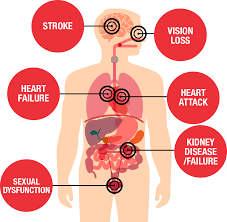 A recent study has been conducted which could potentially help to save millions of people. This study has been published in the journal known as England Journal of Medicine.

High blood pressure, one of the most silent yet most dangerous diseases which kills a lot of people every year. This disease kills more people than the COVID did.

But these are preventable and curable diseases. The cure can be obtained by using low-cost medications along with a low sodium diet intake.
In terms of Global data, this whole country is performing worst. Only 1 out of 7 people having blood pressure can control it with medications and diet. This is eventually killing lots of people every day.

A study done by scientists of Oxford University says that with every 20 % increase in systolic blood pressure, the chances of having cardiovascular complications increases by twice.

So intensive care has proved to lower the risk of heart attacks leading to strokes and eventual death.

Hence the study suggests maintaining the systolic blood pressure below 130 than the standard limits of 140 to stay at safer limits. Also if the blood Pressure is maintained at 120/80, this would help the person to stay healthy and fit to lead a better life.