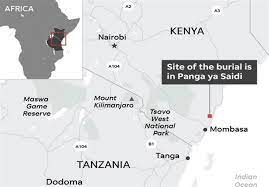 According to a new study, an ancient human burial was discovered in Africa that could potentially change the idea of what everybody knows about the human beings. This discovery provides an idea of how ancient people used to take and treat the deaths.

On Wednesday, it was reported on a journal that a body of 3 year old child was found, which was carefully arranged in an excavated pit. The body was then covered with remaining of the scooped cave.

It was found that the body was placed in such a position that legs were drawn up to the chest. It was predicted on the basis of remaining of the bones. The study further showed that the body was immediately covered and decomposed. It shows that the burial might be an intentional act.

The director of National Research Center on Human Evolution in Burgos, Spain said that on seeing the remains, it can be said that the boy was put in a particular position along with keeping a pillow beneath his head.

It was also said that the way they have put the child into sleeping position with all the care, respect and tenderness shows that Early Africans believed in after life. They were living in symbolic as well as a physical world.

The way this child was treated after his death depicts that he had a complex ritual process and many people came for his burial from his family as well as community. Also, there were no offerings along with this dead body.

Early Humans and Neanderthals burial process seemed different from those of the Africans. The early humans used to burry bodies in their own residential areas.

The present day site where this body was buried is known as modern-day Panga ya Saidi, in Kenya which lies north of Mombasa. Moreover, this study not only provides an idea about the burial procedures but it also depicts the evolution of humans and as well as about the emotions that human beings have.