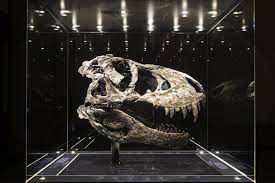 As per the researchers, considering the top predators, millions of T Rex used to roam in the North America and the researchers planned to do the further calculation.

All the information about the extinct animals twe know till date is possible only because of the remains and fossils of the animals but to know about the availability and density of an extinct population is definitely going to be tedious challenge.

Another Paleontologist from the UK University, who was not even a part of the another research said that “Previously researchers have tried to estimate things like the likely home range size of Tyrannosaurus, and its basic energetic needs, so this is a neat extension of previous work, and it includes lots of updated information on Tyrannosaurus.”

In the current research about the T Rex, the team determined that approximately 20,000 adult T. Rex lived in North America at any given time by using evolutionary history, abundance data, and data from climate change models.

Therefore, the researchers assume that about 2.5 million years ago, around 2.5 billions of these T. Rex predators lived and went extinct. Apart from the no. of T Rex, they also tried to calculate the normal life span and weight of the T. Rex.

The researchers predicted that a healthy T. Rex aged somewhat between 15.5 years to 20 years and the average body weight was around 11,464 pounds and their maturity pushed them up to 15,432 pounds.

Hence, it was concluded that to every 100 square kilometers, one dinosaur existed which aged up to 19 years. Also, one in 80 million T Rex’s fossil was preserved hence the fossils were difficult to be found.