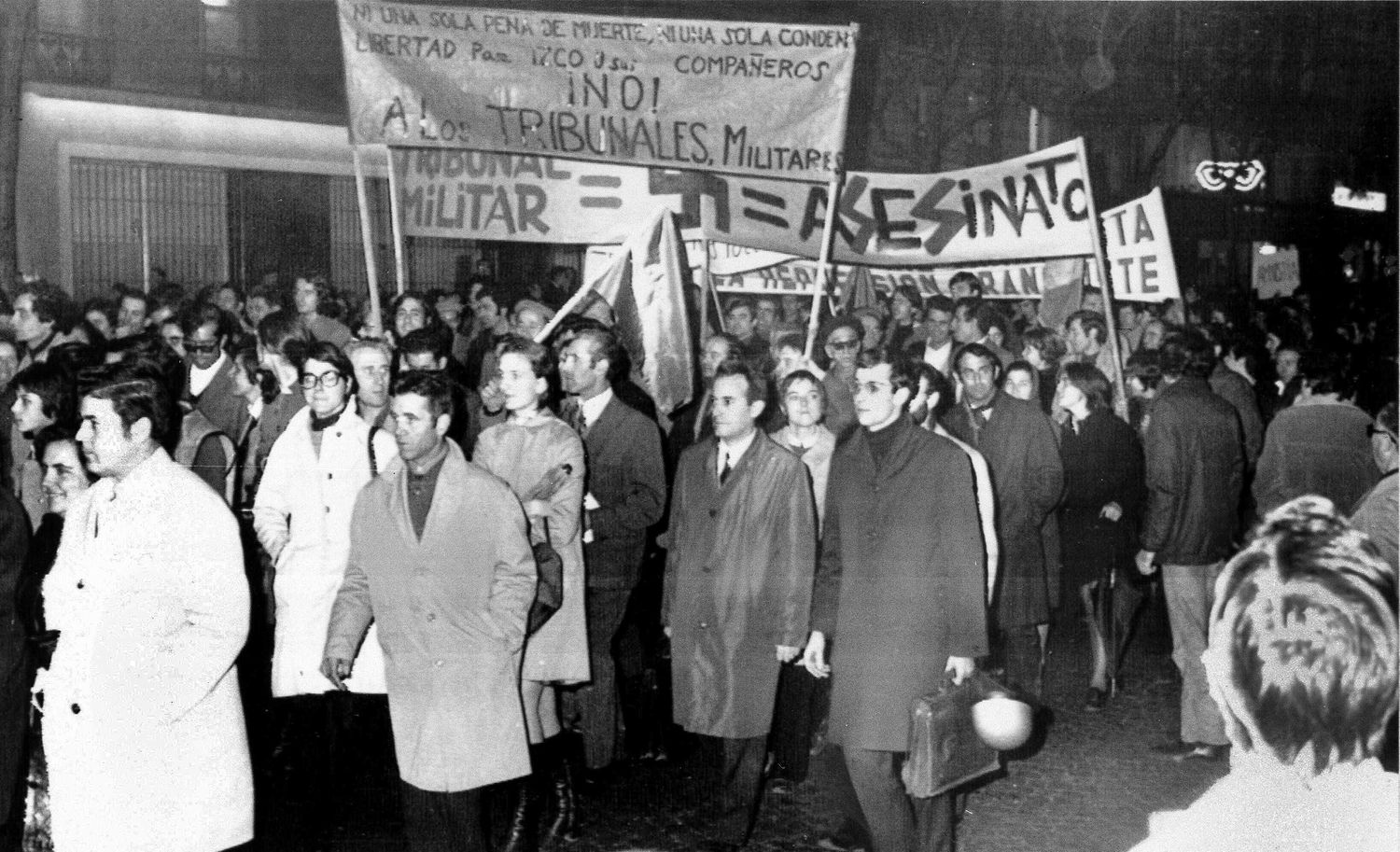 “ The Burgos process marked a milestone in the anti-Franco struggle. It generated an unprecedented mobilization in Euskadi, in Spain and internationally.

It united the entire opposition, deepened the cracks in the regime and reinforced anti-Franco sentiment, “summarizes historian Luis Castells, on the eve of the fiftieth anniversary of the start of the trial – it was on December 3, 1970 – by a military court in Burgos in 16 young ETA militants for the murder of Melitón Manzanas, head of the San Sebastián Political-Social Brigade , the political police of the regime.

The trial had dramatic overtones because the military prosecutor requested the death penalty of six: Eduardo Uriarte , José María Dorronsoro , Mario Onaindia ,Jokin Gorostidi , Francisco Javier Izko and Javier Larena . The military court wanted an exemplary trial against an incipient armed organization, but it turned against the regime.

The 1970 report of the civil government of Gipuzkoa, known today, expresses the shock that the process caused the regime: “The incidents and subversive actions have been more violent and more serious in number and importance than in previous years, and it can be said that since the war Liberation had not created such a difficult and worrying situation ”.

The report specifies how the days of the trial hearing the strike was general in Gipuzkoa and Bizkaia and highlights the unprecedented extent and combativeness of the demonstrations. Barricades proliferated and objects were thrown at the police who used firearms. He killed a young man in Eibar, Roberto Pérez Jáuregui, and shot three others.

The regime initially declared a state of exception in Gipuzkoa and Bizkaia, and later extended it to the whole of Spain.

Image of several of the ETA members who would be tried in the Burgos trial of December 1970, in a photo from 1968, in the Biltzar Ttipia De Dima (Vizcaya), when they were in hiding.

From left to right standing: Xabier Izko de la Iglesia “Txikerra”, Mikel Etxeberria “Makagüen”, Mario Onaindia, Gregorio López Irasuegi “Javi”, Eduardo Uriarte “Teo”, and, crouching, Jon Etxabe.
A bribe to the toughest judge in the process
The strikes and demonstrations spread especially in Galicia, Asturias, Madrid, Seville and Catalonia. Professional sectors, such as the Council of the Lawyers, criticized the lack of guarantees of the trial. The Episcopal Conference and the Vatican demanded that the death sentences not be carried out.

European intellectuals and politicians demonstrated against the regime such as Jean Paul Sartre, Olof Palme , Simone de Beauvoir , Pablo Picasso and Gisele Halimi, who was on trial. The report of the Civil Government of Gipuzkoa highlights the resonance of the French media, which it describes as a “repeated and violent attack” on the regime.

“The mobilizations were against Franco’s repression. Not in favor of ETA. All the opposition participated. But it was the Workers’ Commissions, the PCE and the extreme left (ORT, PCI and Komunistak, later MC) who led the strikes and demonstrations.

ETA did not play any role. The PCE had a decisive influence on the international repercussion. The communists suffered the greatest repression, ”Castells says. José María Castañares, leader of the PCE and Workers’ Commissions, later pointed out:

“We defended those of ETA from humanist positions because they were going to kill them and that humanism cost me three years in prison.”

The social and media impact was extraordinary, despite Franco’s censorship. Castells explains:

“The hearing was held in public session and there was an excellent staging of the defense that evidenced the legal inconsistency of the military court that the international press denounced as well as a cohesive action by the defendants, with a very powerful denunciation of the dictatorship that allowed the media to present them as victims.

There was also a favorable climate for the mobilization to break out, recalls Eugenio del Río, one of its leaders, then the leader of Komunistak, an ETA split .

In August 1968, after the murder of Manzanas, the Government declared a state of exception in Gipuzkoa and Bizkaia, which it extended in November and January, extending it to all of Spain after the police murder of the student Enrique Ruano in Madrid. There were hundreds of arrests, especially in Euskadi, where torture proliferated, and exiles.

There were also two military trials of ETA militants with requests for death, in 1968 and 1969, settled with pardons from Franco.

“In the sixties, with industrial development, Spanish society changed and worker mobilizations increased. A rejuvenated working class emerges, lacking the fears of their parents for the Civil War, which is hardened in the union struggle, which suffers repression and therefore identifies with the Burgos defendants, ”explains Del Río.

Eduardo Uriarte, sentenced to death at the trial and pardoned (like the rest of those sentenced), confirms that “the great mobilization was led by the Workers’ Commissions .

ETA was heavily harassed by the police and divided ”. “In jail we change. The nationalism present in ETA was seduced by the Marxist and anti-imperialist discourse, in vogue after 68. During the trial we advocated internationalist solidarity and some of us declared ourselves Marxist-Leninists.

The nationalist branch abroad elected Telesforo Monzón, an advisor to the Basque Government in the Civil War and exiled in the south of France, as its spokesperson. His interventions had a lot of international echo and gave the process a nationalist bias ”, he explains.

The ETA branch abroad kidnapped the German consul in San Sebastián, Eugene Beilh , during the trial , which upset the defendants because it interfered in the process. But he released him before the sentence was known.

The defendants expressed their differences with the outside world in a letter they sent from the Burgos jail in which they advocated for a socialist organization and not for a national front, Uriarte recalls.
\
The defendants did not apologize for the violence at trial. Uriarte emphasizes that they were different from the later ETA: “The decision to kill Manzanas was made in our environment. But we never wanted to know who the author was. It is the best kept secret.

We were ashamed to kill because we did not have it assumed and because that organization still repudiated murder. The Manzanas murder was not the result of a strategy. After killing Etxebarrieta – the first ETA leader dead – by the Civil Guard, we need to respond to show that ETA was not finished ”.

Castells confirms it: “The ETA, tried in Burgos, barely bears similarities to the later, nationalist and progressively militaristic one that in 1974 murders 19 people and commitsthe indiscriminate killing of Calle Correo in Madrid . Of the 16 from Burgos, only one re-entered ETA ”.

The immediate consequence of the trial was the enlistment of many young people in ETA. “Between 1971 and 1972, ETA was relaunched with several hundred, from the youth of the PNV.

The national and international media echo of the Burgos process favored the anti-Franco regime, but in Euskadi it promoted the nationalist and violent version of ETA ”, Castells points out. Del Río explains:

“The mobilization was led by the left, but the people had as a reference the ETA militants sentenced to death.” Uriarte acknowledges this: “The labor movement had been the benchmark in the anti-Franco struggle, but the Burgos process opened the way to nationalism.

It was capitalized by the most primitive ETA and Monzón played a very important role in the nationalization of anti-Francoism in the Basque Country ”.

Del Río admits as a negative consequence of the process “the legitimization of ETA violence.”

But it considers as a positive part, “the reinforcement of the anti-Franco struggle until the end of the dictatorship.” Uriarte emphasizes positivity: “It marked the beginning of the end of the dictatorship that lived an insurmountable contradiction between an economic liberalism and an authoritarian regime that in those days recovered the most fascist discourse of the postwar period.

Europe discovered that Franco’s Spain was a pending issue after the allied victory against fascism ”.

Castells attaches great importance to the international media coverage: “Its European repercussion caused terrible damage to the divided regime, which lost the information battle.” The historian assures that the pressures of the European governments and of the liberal sector of the Government, that looked at Europe, were decisive for Franco to pardon those sentenced to death.

Castells highlights that the Burgos process “consolidated anti-Franco sentiment and opened a new stage.” In this new stage, the distancing of the regime from one of its pillars, the Church, will play an important role.

It was also the Church, the Montserrat Monastery , which welcomed representatives of the entire political opposition in Catalonia to sign a manifesto against the regime.

It was the embryo of the first unitary body against Francoism, the Assembly of Catalonia. Three years later, the Democratic Board and the Platform of Democratic Organizations would be established at the national level.