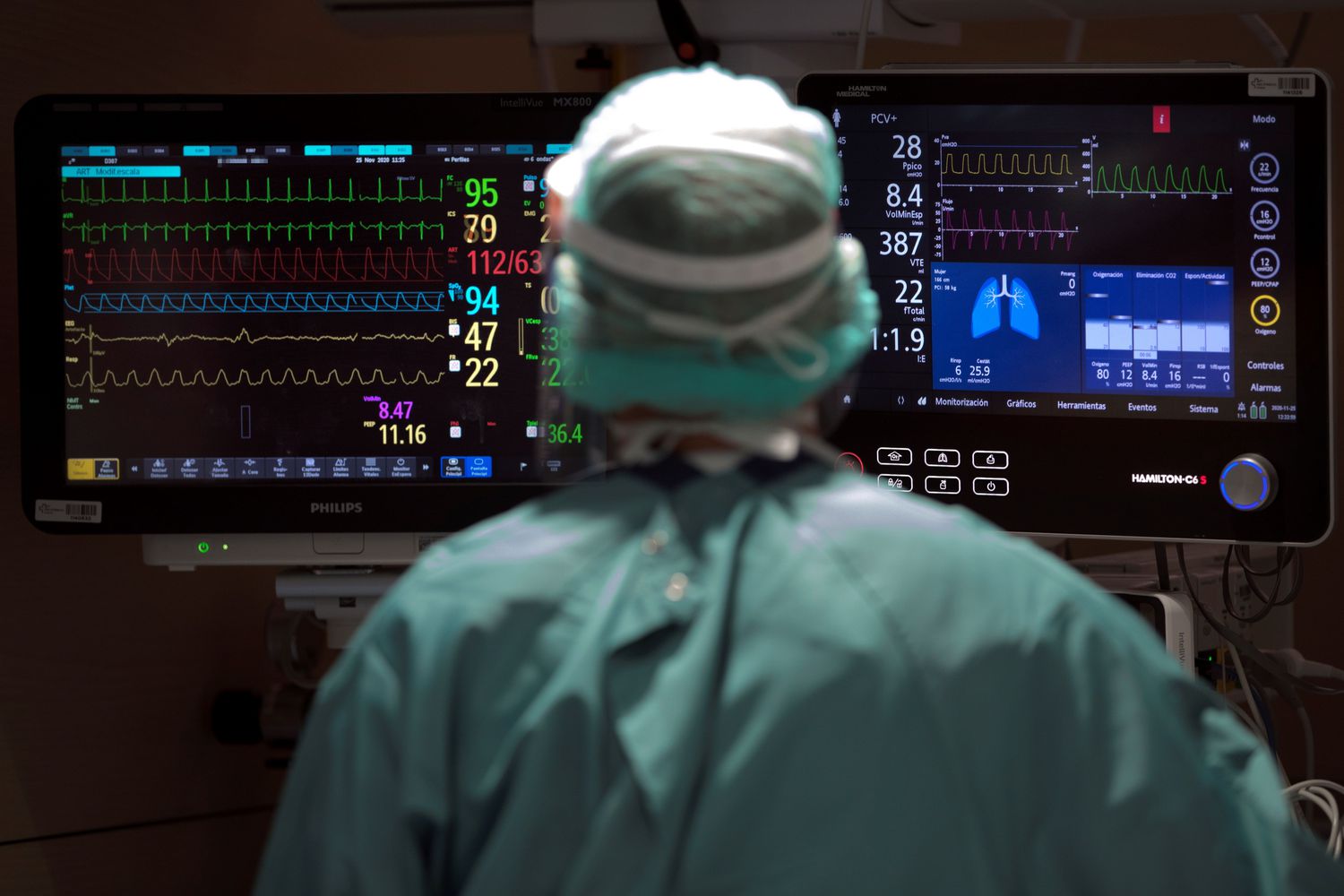 “In hospitals we began to see the effect of the fall in incidence.” Germán Peces Barba, vice president of the Spanish Society of Pneumology Separ and doctor of the Jiménez Díaz Foundation in Madrid is relieved that, at the moment, the occupation of beds by patients with covid in his center is “a third of what there was in September ”.

It is the effect of the reduction in covid cases in the population that began on November 9, after a state of alarm was decreed on October 25 and the communities each implemented a range of measures to stop an incident that arrived that day to 529.43 cases per 100,000 inhabitants in 14 days (this Friday it was 307.3).

The improvement in hospital and ICU beds came later, after a kind of stabilization of two weeks. From November 2 to 19, the occupancy due to covid was above 15%, with a peak of 17.28% on November 9. This Friday it was 11.95%.

It hadn’t been below 12% since September 22. Between Friday 20 and this Friday, all the communities, Ceuta and Melilla, have significantly reduced this indicator. It has only remained stable at 4.08% in the Canary Islands, the best figure in Spain.

In intensive care there is also an improvement, but less. “The ICUs are very full, although not saturated,” says Peces Barba from his hospital. “Yes, the decrease is noticeable,” says Pedro Rascado, intensivist at the Hospital Clínico de Santiago and member of the SEMICyUC scientific society.

“And that here, in Galicia, the peak of the second wave has been lower,” he adds. This Friday, the proportion of hospital beds occupied by covid patients in their community was 5.58% and that of ICUs was 12.43%.

In the whole of the country, ICU occupancy has gone from 31.02% to 28.64% in seven days. The impact of the drop in cases is less, and still in the Balearic Islands, Extremadura and the Basque Country this parameter has not started to decrease.

La Rioja is the community with the highest occupancy of critical beds by patients with covid, 56.57%, according to data provided by the Ministry of Health this Friday. Alberto Lafuente, manager of the Riojano Health Service, explains that the ICU beds at the San Pedro de Logroño hospital have increased from 17 to 32, and now another expansion is being prepared to 54.

“We have high pressure” because we have had a “ high incidence, “he explains, but” the predictive model is being met and we only have 1% [of those diagnosed] admitted to the ICU, “he says. La Rioja had an incidence of 803.7 on November 9;

This Friday it was at 445.71. If the pattern is met, you should start to notice relief soon. At the moment it has already managed to lower its cases, the occupation of the beds (it is at 13.84%,

Specialists carefully observe the evolution of the number of cases, since for them it is a predictive parameter: if they rise, in two or three weeks they will notice the impact.

That is why Rascado does not doubt that in his hospital in particular and in Galicia in general the release of beds was going to happen “yes or yes as the incidence decreased for several weeks”. “It’s math,” he says. “So the key to maintaining this is to control what happens outside the hospital,” he adds.

“Our obsession is to control the incidence because it translates into hospital pressure within two weeks. We do not want to see each other again as in April ”, agrees a spokeswoman for the Balearic Health Council, the second community with the least occupation of beds after Galicia. The archipelago has an incidence of 202.

“For weeks we have been moving around 50 patients in the ICU (between 17% and 20% of the available places). It is half the maximum pressure we had in the first wave. Despite the fact that we are tending towards a drop in income at the plant and stabilization at the UCI, this continues to be what worries us the most ”, he adds.

“It is true that in intensive care the decline always comes later, generally about two weeks later than conventional hospitalization, because our admissions are longer, but despite the good data we cannot lower our guard because there are patients who continue to get quite worse. ”, Says José Eugenio Guerrero, head of the Intensive Care Unit at Hospital Gregorio Marañón.

The specialist in health management of the General Council of Nursing Guadalupe Fontán agrees that what matters is that cases fall, but believes that this is not the only reason for the decrease in healthcare pressure in hospitals.

“In the first wave, the average stay of those admitted was very long because nothing was known about the virus, but now the management is clearer,” says Fontán. In addition, the data indicate that in this second wave those affected are younger (they have a median age of 41 years, compared to 60 in the first).

As always in this matter, all the specialists add a but to good data. They do not want to encourage prevention measures to be relaxed. “We are not well but we are a little less bad. And the professionals are tired and not knowing if we will have Christmas.

If people take to the streets on December 10, on December 24 they will begin to enter and at the beginning of the year the ICUs will be filled. I would say that the interesting thing is not to celebrate this Christmas, but to celebrate many Christmases ”, sums up an intensivist who demands anonymity from the Virgen de las Nieves Hospital in Granada, the Andalusian center that has suffered the most pressure from beds in the last month, with an occupation of up to 60%, reports Javier Martín Arroyo .

“We are very little optimistic for January, an already complicated month, with many respiratory infections. I understand that people cannot stop going out, because we are going to dehumanize ourselves. But if we go out without complying with the rules to closed and crowded spaces, bad.

People have to understand that the world has changed, we will never be the same as before. It is not black or white, it is not about going out into the street, drinking it all and burning the night, nor about staying home drinking water ”, says this specialist.

“We are shaking. We walk along an edge that can twist at any moment, “says Peces Barba, who recalls that” it was what happened to us in September. ” “Everybody starts to breathe, but there are still a lot of people in their 40s or 50s in ICUs. We should not relax ”, ditch the nurse.