A former Playboy model, Kelsey Turner, has been sentenced to serve 10 to 25 years in prison for her role in the 2019 killing of California psychiatrist Dr. Thomas Burchard. Turner, 29, had agreed in November to an Alford plea, which maintains her innocence despite evidence that would likely have resulted in a guilty verdict if presented before a jury, based on a report by 8 News Now on January 11, 2023. Turner did not make any statements during her sentencing.

Burchard, 71, had traveled from California to Las Vegas, where Turner was located at the time, to end their two-year relationship, in which he reportedly gave her an allowance to fund her lifestyle totaling an estimated $300,000, according to 8 News Now. Prosecutors say that Turner and her then-boyfriend, 29-year-old Jon Logan Kennison, beat Burchard to death in their home and hid his body in the trunk of Turner’s Mercedes. The Clark County coroner concluded that the physiatrist had been beaten with an unidentified object in what police described as a unique pattern.

Based on a report released by Fox News on January 11, 2023, their 34-year-old roommate, Diana Nicole Pena, pleaded guilty to being an accessory to murder after cleaning the crime scene before fleeing Las Vegas with Turner and Kennison. Kennison pleaded guilty to second-degree murder and conspiracy and was sentenced to 18–45 years in prison.

Evidence found at the scene includes a broken door, blood and cleaning supplies, fingerprints, a baseball bat, and matched towels found in Turner’s car. Burchard’s girlfriend also testified that Turner forged his signature to steal his money. The body was found in an abandoned car on March 7, 2019. 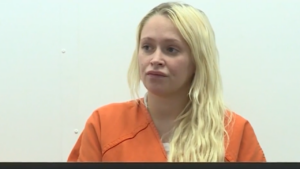