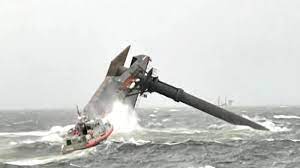 After the death of 1 crew member and 6 survivors in the rough sea, the coast guards  are searching for 12 more missing people. This happened on Wednesday in coast of Louisiana when their commercial vessel was capsized in hurricane winds.

Coast Guard stated that the wind speed was about 80-90 mph and the seas were about 7 to 9 feet. Moreover he added “It’s challenging under any circumstance.”

At south of Port Fourchon, a heavy vessel with three long legs that was lowered to the floor of the sea to take it off shore got flipped over. Also, videos were released showing the ship turned with one of its leg facing the sky.

4 coast guards, 4 private guards and Coast Guard airplanes were involved in the search team for finding the missing crew members. They all were Corpus Christi, Texas, and Mobile, Alabama based. Also, a coast guard helicopter was also sent.

A private hotline was set up by the company owning the ship, to share the information to the families of the crew member.

The warning about the bad weather was already given by the sources along with a special marine warning that was advised before 4 pm. But around 4.30 pm, the coast guard received the emergency signal and did an emergency broadcast about the situation which led to the rescue of 4 members and the coast guard rescued further 2 members.

According to the coast guard, the boat capsized due to a microburst, but other officials said it was a straight line wind that swept over a large area.