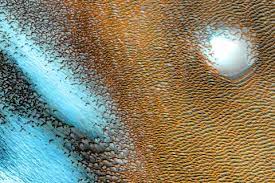 NASA recently released few pictures taken on Mars which revealed that showed the appearance of blue sand dunes on the planet.

Researchers captured a thermal photograph of the Martian north pole, digitally colored to highlight the vast range of conditions there, using a special infrared camera onboard the Mars Odyssey space probe, which has been flying over the Red Planet since 2001.

According to the statement by NASA, the blue color indicates the colder areas of mars while the yellow and orange areas depicted the hotter areas of Mars. The images showed covered about 19 miles of the Mars. Sand dunes of Yellow color are warmed by Sun whereas the black colored ones are colder and darker.

The researchers explained that the picture comprised of small portion of Martian North Pole, which itself is as big as Texas. Resembling to Earth, the Martian poles are the coldest regions on Mars with temperature going down as low as -140 C in winters.

Both the Martian Poles are covered with capes of water ice as well as the dry ice comprising carbon dioxide. Moreover, the cracks on the ice gives an appearance of “Spider on Mars.” There may be several liquid water lakes beneath the Martian Poles according to the Scientists.

As per NASA, there were about 1 million pictures of Mars that were sent to Earth by the Odyssey and were shared to public on it’s 20th anniversary on Space. These pictures were clicked by Odyssey from the year Dec 2002 to November 2004.

Apart from revealing ice in the Mars, it also helped NASA Scientists in many other ways. Its robotic features have helped scientists to pick a perfect spot in the space to set Perseverance rover. This Perseverance rover was sent to the space in the year 2012. Hence, a whole new picture of Mars is in the hands of scientists now which can further help them to study more about the red planet.