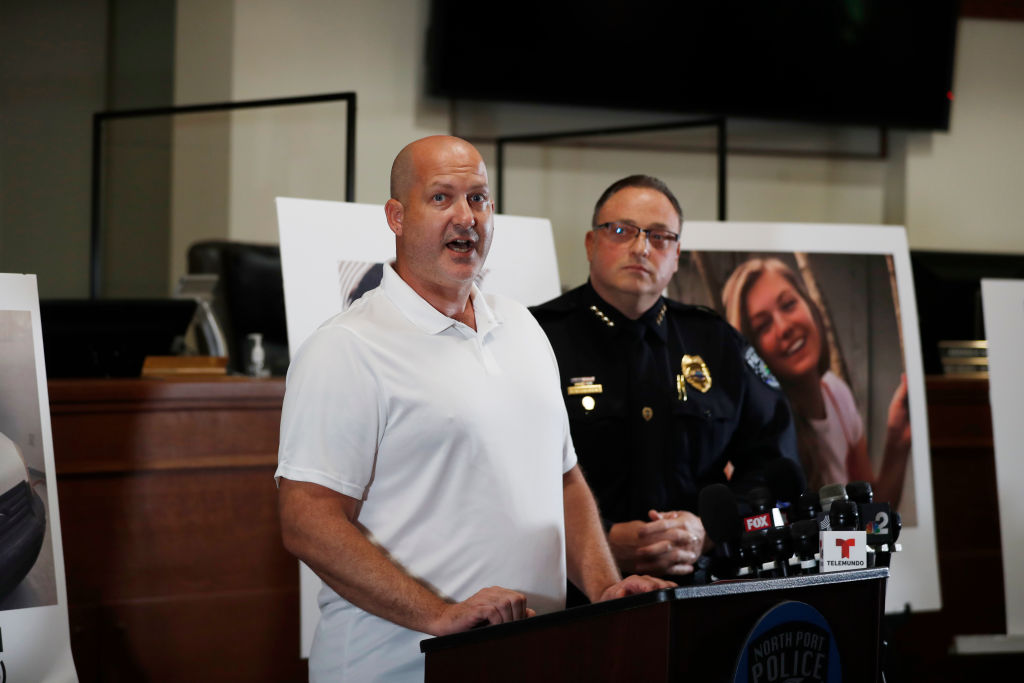 NORTH PORT, FL - SEPTEMBER 16: Joe Petito (L) pleas for help during a news conference to help finding his missing daughter Gabby Petito on September 16, 2021 in North Port, Florida. Gabby Petito went missing while on a cross country trip with her boyfriend Brian Laundrie and has not been seen or heard from since late August. Police said no criminality is suspected at this time but her fiance, Brian Laundrie, has refused to speak with law enforcement. Laundrie has be identified as a person of interest but investigators are solely focused on finding Petito. (Photo by Octavio Jones/Getty Images)

The mother of Gabby Petito claims she trusted her fiancé, Brian Laundrie, to safeguard her on the couple’s cross-country road trip.

Schmidt, on the other hand, said that she felt secure since she was with Brian. Laundrie, she assumed, would look after her daughter.

Investigators said they attempted unsuccessfully to communicate with Laundrie and his parents for the first few days of Petito’s missing person investigation. The family referred them to the family’s lawyer, who had told his clients not to say anything.

“Silence says volumes,” Schmidt remarked during the interview. She implied that Laundrie’s parents might know what happened to Gabby Petito.

She thinks they are likely to be aware of the majority of the facts surrounding the case. Schmidt also wanted to find out why Laundrie’s parents are doing it.

Laundrie, 23, was last seen the day before, when he left his parents’ house in North Port, Fla., claiming to be going on a walk-in nearby Carlton Reserve, a 25,000-acre nature preserve with marshy wetlands as its main feature.

Officials regarded him as a person of interest but not as a suspect in her death. In late September, they issued a warrant for his arrest. They charged Laundrie with making illegal debit card purchases. His parents, according to his family’s attorney, have no clue where he is.

Petito, a native of Long Island, New York, and Laundrie had set off on a cross-country trip in July, driving from Florida to New York in her white Ford van and then going west. Gabby Petito intended to create a blog about their new “vandwelling” lifestyle after documenting their experiences on her YouTube channel.

Schmidt told 60 Minutes Australia that she backed Petito’s choice to go with Laundrie, describing him as “nice and quiet.” (Gabby’s father, Joe Petito, previously told PEOPLE that Laundrie had “no red flags.”)

Schmidt, on the other hand, now wants to see Laundrie brought to justice.

Petito’s stepfather, Jim Schmidt, reprimanded Laundrie for “hiding” from police and said he and his wife “want revenge… and justice” on 60 Minutes Australia.

The Laundrie family met with the FBI for the first time on Sept. 17. Still, instead of receiving answers regarding Gabby Petito’s disappearance, investigators claim they were told that Laundrie had gone missing as well, prompting them to open a second missing person investigation to find him.