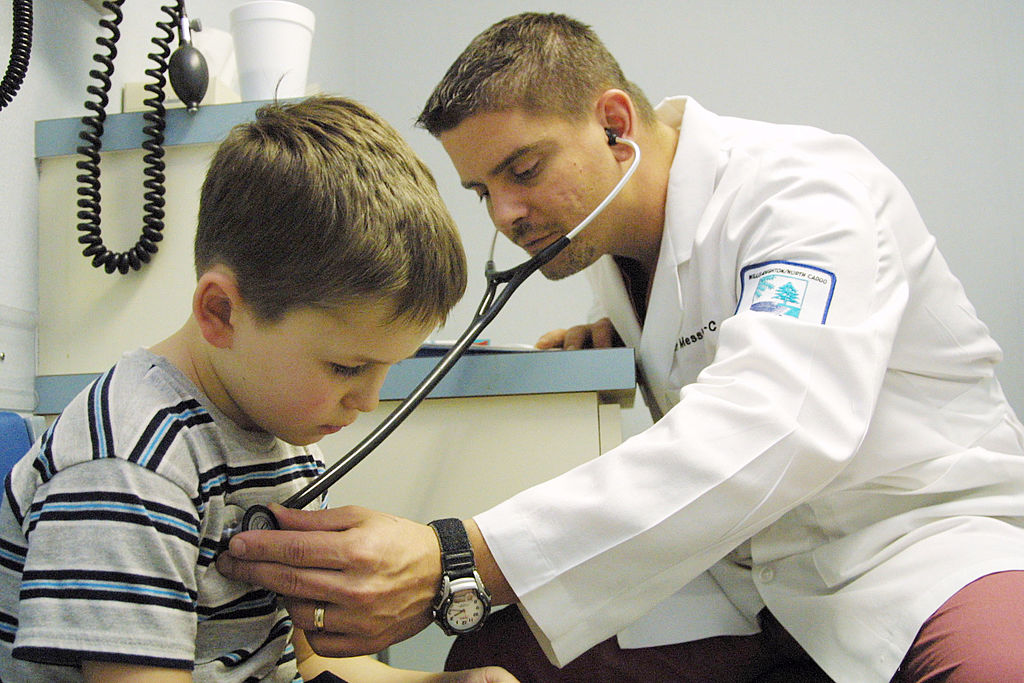 VIVIAN, LA - DECEMBER 12: With a temperature of 103.8, Asa Moore, 6, of Vivian, Louisiana is examined by John Messier, a physician's assistant, at the North Caddo Surgical and Medical Center for symptoms of Influenza December 12, 2003 in Vivian, Louisiana. Moore had not received a flu shot and the medical center was out of the vaccine. (Photo by Mario Villafuerte/Getty Images)

NHS chiefs and health experts worry that 60,000 people may die from influenza this winter. Hence, officials reiterated their appeal for people to be vaccinated against the illness as soon as possible.

Experts predict that cases of coronavirus, flu, and other respiratory illnesses will rise in the coming months. They said the possible increase could lead to more hospitalizations and more significant strain on health systems throughout England.

Professor Jonathan Van-Tam, the deputy chief medical officer, said in a Daily Mail report that the absence of flu last year made this winter’s danger a major public health issue. 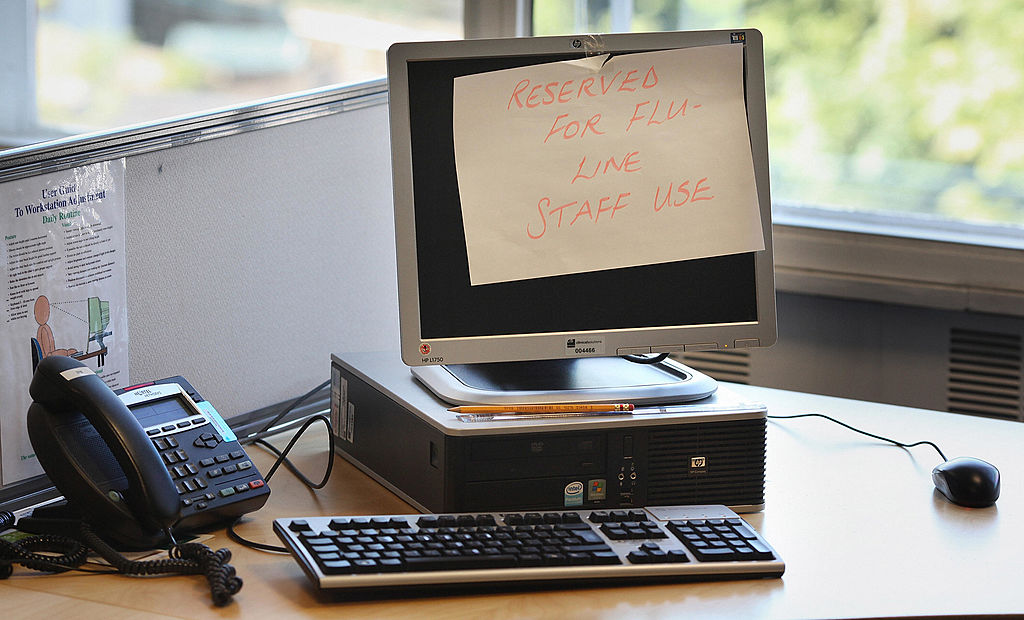 A computer work station is reserved for flu line use at a National Health Service call centre in south London, on May 1, 2009. Britain launched a mass public information campaign Thursday over the threat of ‘influenza A’, formerly known as ‘swine flu’, as its top medical officer warned there would be “many more cases” of the potentially lethal virus. AFP PHOTO/ Peter Macdiarmid/WPA POOL (Photo credit should read PETER MACDIARMID/AFP via Getty Images)

Lack Of Flu Immunity Could Lead To Up To 60,000 Fatalities

According to the Academy of Medical Sciences (via The Independent), a lack of population immunity caused by Covid limitations during the last year may result in between 15,000 and 60,000 flu fatalities.

If influenza vaccination coverage isn’t high enough for the winter, a top government health official cautioned that the death toll may rise to the upper end of that projection.

The NHS wants to provide the flu vaccine to at least 85 percent of individuals aged 65 and above. It also aims to reach at least 75% of individuals with underlying health problems, 75% of pregnant women, 70% of eligible children, and at least 85% of all health and social care professionals.

Because of the Covid-19 limitations, Prof Van-Tam stated that not many individuals had flu last year, so there isn’t as much natural immunity in our communities as normal.

This winter, he believes, they will have to watch flu spread. According to Van-Tam, it may be greater than normal, posing a serious public health threat.

More than 35 million individuals in England will be given the flu vaccination. But how many have got it so far is unknown. Experts will publish data from the UK Health Security Agency next Thursday.

However, uptake and the vaccine’s efficacy will determine the flu vaccination program’s success in England and the rest of the UK.

In a normal year, scientists preparing for winter in the northern hemisphere would monitor the major influenza strains circulating among southern people and modify the vaccine appropriately prior to its distribution.

However, owing to the low quantity of flu in circulation worldwide over the last 18 months, this procedure has been difficult. The situation created ambiguity about which influenza strains to target.

As a result, government health experts have issued a warning that estimating the efficacy of this year’s flu vaccine is impossible.

The Francis Crick Institute’s World Influenza Centre told The Independent last month that “a good outcome for vaccination efficacy would be 60 to 70% – thereby lowering flu levels in the population by almost half.” This will have a significant impact on the healthcare system.”

Meanwhile, approximately 1.7 million people received a third dosage of COVID-19 booster shots, out of a total of 28 million eligible people. In addition, COVID-19 has been double-jabbed in about 66% of all UK individuals.

A new study indicates that people in England underestimate the combined danger of the two viruses. The data coincides with the government’s effort to boost the adoption of flu and Covid vaccinations.

People infected with both influenza and coronavirus are more than twice as likely to die as those who are just sick with COVID-19. But almost a third of the population is unaware that the two viruses may coexist.

According to a government-commissioned poll of 3,000 people, more than a quarter of those polled were unaware that flu might be deadly. More than half of those polled overestimated the number of people who die from flu each year – approximately 11,000.

Flu activity in the general population is at an all-time low. But Prof Van-Tam believes the public should take the virus seriously this winter, with Covid-19. Flu may both quickly spread, induce hospitalization, and be deadly,” he added. He urged people to receive their vaccinations as soon as possible.

Dr. Nikki Kanani said the county is facing “an increased danger from the two fatal viruses this winter. Kanani, the deputy head of the NHS immunization program, added that vaccinations are still the greatest thing a person can do to protect themselves.