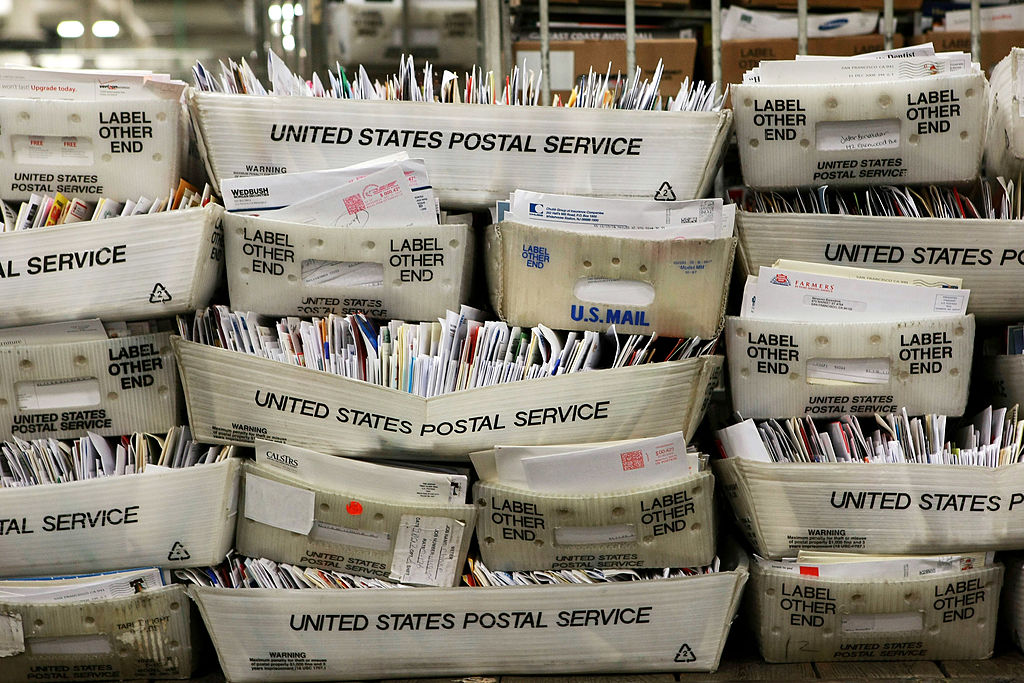 SAN FRANCISCO - DECEMBER 15: Stacks of boxes holding cards and letters are seen at the U.S. Post Office sort center December 15, 2008 in San Francisco, California. On its busiest day of the year, the U.S. Postal Service is expecting to process and mail over one billion cards, letters and packages. (Photo by Justin Sullivan/Getty Images)

A US Postal Service (USPS) slowdown will happen in 2021 due to the current COVID-19 situation and other economic problems. Officials warned the customers that the increased rates would mean a longer delivery time and a price increase.

CNET said the new service requirements for first-class mail and parcels, which went into effect on October 1, would cause a 30 percent delay in delivery. As a result, the USPS Slowdown in 2021 may take up to five days to arrive for longer-distance mail, shipments, and magazine subscriptions. That is longer than the normal two or three days.

CHICAGO – AUGUST 25: United States Postal Service trucks sit outside the Roberto Clemente Post Office August 25, 2009 in Chicago, Illinois. The Postal Service announced it would offer $15,000 for buyouts of up to 30,000 employees eligible for retirement, early retirement, or those in select positions. (Photo by Scott Olson/Getty Images)

In addition, on top of the recent pricing hikes that went into effect in August, the US Postal Service recently increased the cost of delivering a package over the Christmas season.

Sending letters or shipments across the nation via the USPS is already a game of chance for many individuals. In the first quarter of 2021, about 20% of first-class mail was delivered late.

The current changes are part of Postmaster General Louis DeJoy’s 10-year Delivering for America plan to reorganize the agency and deal with its massive debt. DeJoy’s proposal has generated controversy since it not only extends mail delivery times and increases costs, but it also reduces post office hours.

The USPS handles and distributes 17.7 million mail items each hour on average, including packages from online merchants like Amazon. However Americans grow more dependent on electronic payments and communication. Hence, the quantity of first-class postal items like letters, cards, and bills has plummeted.

The agency is having trouble keeping up with rivals such as UPS, FedEx, and even Amazon. That is because of the rising popularity of e-Commerce.

ALSO READ: Child Tax Credit: How to Track Delayed $300 September Payment, Here’s What You Should Know

USPS raised the price of a first-class stamp from 55 cents to 58 cents as of August 29. As a consequence, Forever stamps have increased in price by 3 cents. Forever stamps, on the other hand, never expire. Thus, those bought in 2020 or any earlier year will remain valid even if the postal rate has risen.

The Postal Service has announced a temporary price increase for commercial and retail domestic package shipments. The delays would be from October 3 to December 26. Prices for priority mail, priority mail express, and first-class package delivery will increase, too. The prices range from 25 cents to $5 per box. USPS detailed the changes here.

Rate hikes may be much greater over the following decade, according to the agency’s projections. While the Postal Regulatory Commission said they will not increase the prices until the following summer. In 2023, the USPS is projected to increase rates twice a year.

The USPS has claimed that it is struggling to meet high-performance standards and has been financially unstable for some time. Personnel shortages combined with a surge in online needs buying and a rush of 2020 election votes, pushing DeJoy into the national spotlight.

The USPS plans to save money by using fewer aircraft to carry mail and instead relying on more trucks to convey more mail for less money. Ground transportation is more dependable than aviation in all seasons, according to the Postal Service.