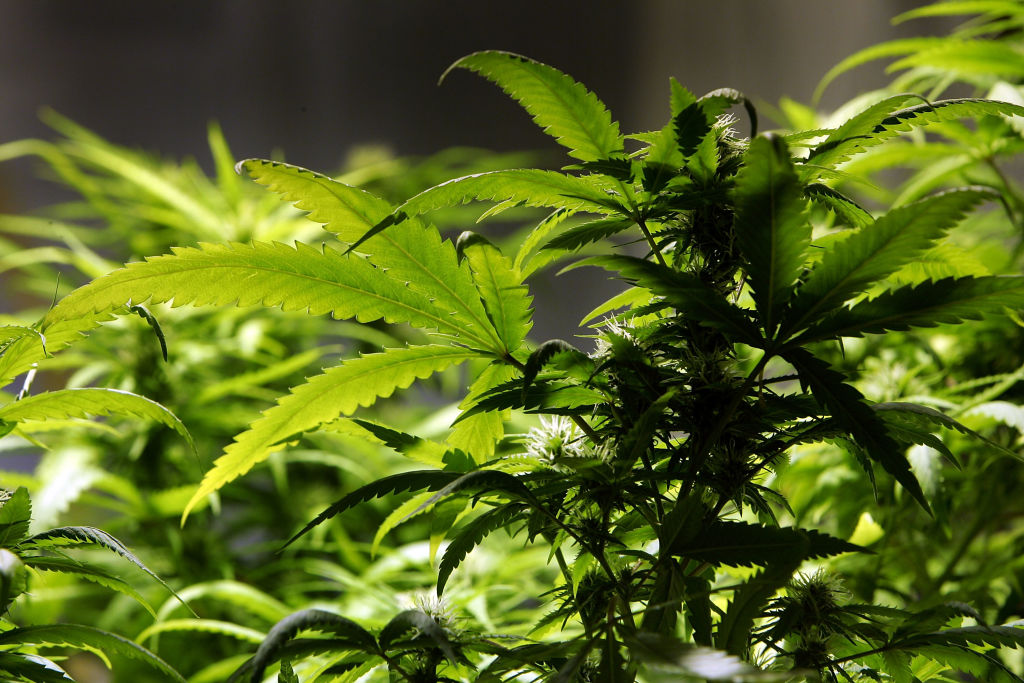 AMSTERDAM, NETHERLANDS - FEBRUARY 07: A cannabis plant grows in the Amsterdam Cannabis College, a non profit charitable organisation that gives information on cannabis and hemp use on February 7, 2007 in Amsterdam, Netherlands. The city council in Amsterdam has recently voted in favour of introducing a citywide ban on smoking marijuana in public areas. A successful trial ban in the De Baarsjes district of Amsterdam has been declared a success after a reduction in anti social behaviour. (Photo by Christopher Furlong/Getty Images)

The Alameda County Sheriff’s Office claimed to have made the “largest illicit marijuana raid in Bay Area history” after executing search warrants throughout the East Bay. On Wednesday, they expect to discover around 100,000 marijuana plants.

“This organized and sophisticated network of individuals were making tens of millions of dollars in profit and avoiding California Marijuana Regulations,” the sheriff’s office said per KRON4.

Officials noted that the bust involved discovering millions of dollars worth of infrastructure, equipment, lights, generators, and supplies needed to assist the growth. On Thursday, authorities were seen cutting down the plans using gas-powered trimmers in order to save time. The white greenhouses of a cannabis growing operation that was constructed in March is seen between Fiddlestix (top) and Sea Smoke (bottom) vineyards in the Santa Ynez Valley northwest of Santa Barbara, California on August 6, 2019. – A bitter war has erupted between pot growers and vintners in one of California’s famed wine regions where cannabis farms are proliferating, leading critics to denounce a “green rush” they fear could prove catastrophic. The battle, which began shaping up after California voters legalized recreational marijuana in November 2016, has pitted wine growers in Santa Barbara County and residents of the picturesque beach town of Carpinteria against a new neighbor they say literally stinks and threatens their livelihood and way of life. (DAVID MCNEW/AFP via Getty Images)

Sheriff’s spokesperson Sgt. Ray Kelly told Newsweek (via MSN) that the seizure of the plants and cash on Wednesday occurred after an 18-month investigation.

After receiving a tip about an illicit marijuana growing enterprise, narcotics detectives from the Alameda County Sheriff’s Office launched an investigation.

While the original Facebook post said that “over 100,000 plants” had been confiscated, Kelly told Newsweek that the amount might be “up to half a million.” While recreational marijuana use and consumption are legal in California, people can only cultivate up to six plants per household.

ALSO READ: Use of Marijuana: What Causes Uncontrollable Vomiting?

On Thursday, Kelly told KPIX that all of the money would go directly into their wallets. He went on to say that there is a legitimate method to accomplish this. He added that evaders should return the money to Californians.

While seven people were arrested in the operation on Wednesday, deputies said additional arrests are expected, with suspects facing accusations of money laundering, tax evasion, and running illicit marijuana grow.

RELATED ARTICLE: A Loose Dose of Laughing Gas Can Relieve Symptoms of Depression!