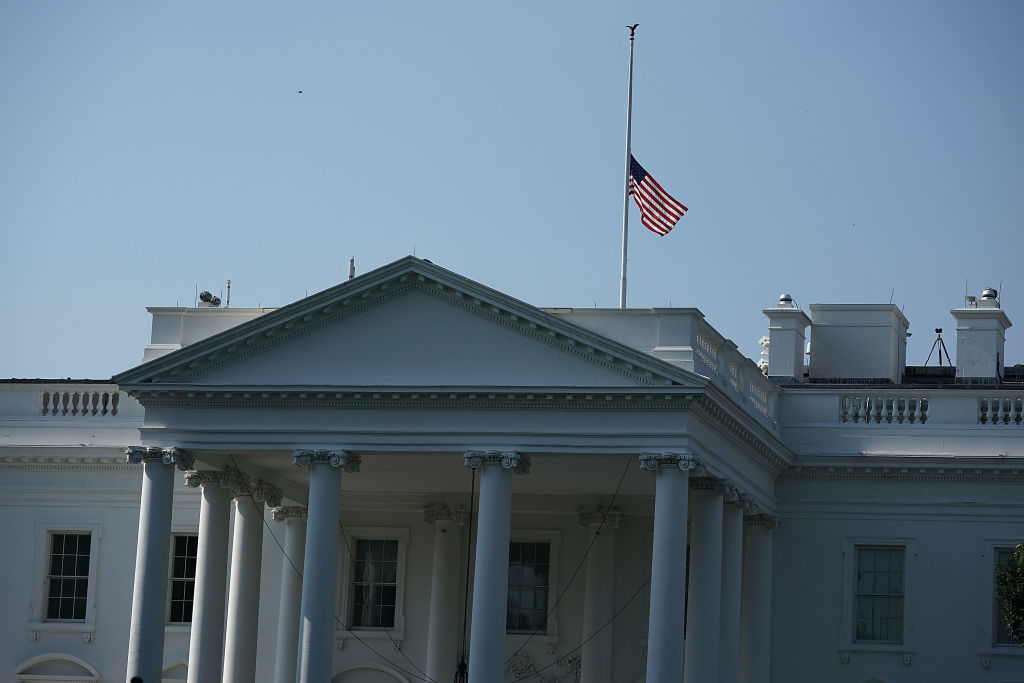 WASHINGTON, DC - JULY 03: An American flag flies at half-staff on top of the White House July 3, 2018 in Washington, DC. After reports about President Donald Trump's rejection for a flag lowering request from Annapolis Mayor Gavin Buckley on Monday, the White House ordered U.S. flags to lower to half-staff in remembrance of the mass shooting at The Capital Gazette in Annapolis, Maryland. (Photo by Alex Wong/Getty Images)

ANNAPOLIS, MD – JULY 02: The Capital newspaper’s logo is stenciled onto a newspaper vending machine following last week’s shooting at the community newspaper’s office July 2, 2018 in Annapolis, Maryland. Gerald Fischman, 61, the newsroomÕs editorial page editor; Rob Hiaasen, 59, an editor and features columnist; John McNamara, 56, a sports reporter and editor for the local weekly papers; Wendi Winters, 65, a local news reporter and community columnist; and Rebecca Smith, 34, a sales assistant; were shot and killed last Thursday by a man who investigators say had a long-running dispute with the newspaper. Police arrested Jarrod Ramos, 38, in the paperÕs newsroom following the shooting and he is being held without bond on murder charges. (Photo by Chip Somodevilla/Getty Images)

On June 28, 2018, Ramos went into the Capital Gazette offices in Annapolis and started fire, killing five employees. Ramos had two more casualties during that incident. A jury rejected Ramos’ claim of insanity on July 15 of this year, and the jury judged him criminally liable for the assault.

Judge Michael Wachs of Anne Arundel County sentenced him to at least five life terms without the possibility of parole on Tuesday.

“To say that the defendant exhibited a callous and complete disregard for the sanctity of human life is simply a huge understatement,” Wachs said during his sentencing.

Guilty but Not Criminally Responsible

In October 2019, Ramos pled guilty but not criminally responsible to 23 charges, including murder, setting the stage for this year’s trial, in which a jury was asked to decide on his mental state at the time of the shooting.

The trial started in late June after many delays, including Covid-19, according to the Capital Gazette. The jury reached a decision in less than two hours.

Ramos is now facing five life sentences without the possibility of parole. He had another extra life sentence for attempted murder and hefty terms for weapons crimes.

According to the American Public Health Association, gun violence in the United States is a public health emergency. It is the country’s top cause of early mortality, accounting for more than 38,000 fatalities per year. The Gun Violence Archive said at least 33,142 individuals have died as a result of gun violence this year as of Sept. 28.

RELATED ARTICLE: 4-Year-Old Boy Shots in the Head While Sleeping, Dies 2 Days After the Brutal Killing