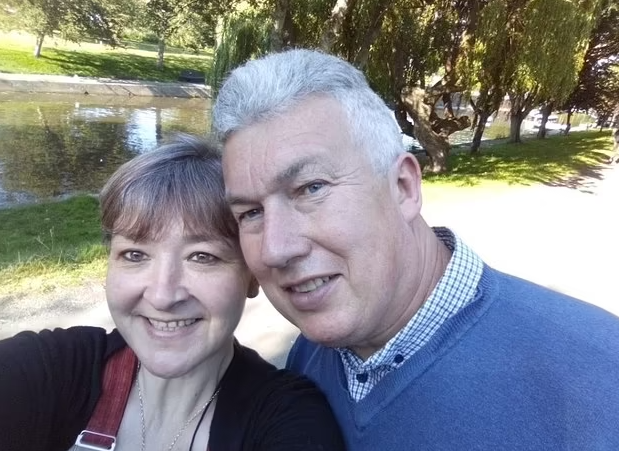 The dispute over a four-foot-high fence outside a house next to a chip business took a dangerous turn yesterday when a man was detained for firing at the couple who built it. The story then took a new turn when council workers arrived to demolish the divisive construction. Before the council workers arrived to tear it down, the 4ft-high fence was photographed (Photo: SWNS)

Christine Williams, 50, an angry property owner, said her husband Stephen, 57, would be ‘putting it right back up’ today since she insisted they were within their rights according to their home’s titles.

The dispute brewed since 2019

Mr. and Mrs. Williams chose to change jobs and close the sweet shop they had owned next to the chippy in Alnwick, Northumberland, in 2019. They changed the shop, which sits flat to the pavement, into their living space instead of living in addition to the side of the store.

However, during the COVID issue, neighborly relations deteriorated when the chip shop owner marked out spots for customers to wait outside, which led them past the Williams’ front window. According to Mrs. Williams, her husband went outside and cleaned off the marks, although there was no need for it in the first place.

They might have quickly queued in the opposite direction, which leads right to the chip shop’s enormous parking lot. Furthermore, according to her, the fence is there to designate their front-of-shop boundaries, which stretch into the sidewalk.

The pair claims their property deeds prove they own the site, which Northumberland County Council accepted in 2017. In a letter dated October 19, the Williams’ Infrastructure Records Manager stated that he could confirm that the Council will assume no future duty or liability for the quality of the paved area immediately to the front of their home, which is in their control.

She was disappointed by how it has been handled, Mrs. Williams, who now works in care, added. They’ve been emailing the Council for six months, describing their plans, but the Council has yet to answer. On the one hand, Mrs. Williams said, they had no right to tear down the fence, and her husband will replace it because they have the right to identify their boundaries. A 34-year-old guy was arrested and is cooperating with police investigations (Photo: ncjMedia Ltd.)

It was a terrible experience – Mrs. Williams

Mrs. Williams has been traumatized by the whole event. On Thursday, after the pair returned from work, Mr. Williams went outside to work on the fence while the wife sat on a chair in front of the house with their dog, keeping him company. All of a sudden, Mrs. Williams noticed a man on the other side of the road, aiming a gun at her. As the shot was fired, she yelled at Stephen, who moved me away, she narrated.

It was a terrible experience, she said. The whole situation has rattled her tremendously. Until the wee hours of the morning, they had forensics on the premises. However, a local councilman had criticized the couple’s decision to install the fence, which blocks a stretch of the roadway and a lay-by.
Mr. Williams claims to have deeds proving ownership of the land on which his fence now stands. According to a spokesman for Victoria House Fish and Chip Shop, the fence had been taken down, but he declined to comment further.

Shortly before 6.50 pm yesterday, officers received a report of concern for safety following a disturbance on Victoria Crescent in Alnwick, according to a Northumberland Police spokesperson. It was stated that two parties were involved in a disagreement during which an air weapon was fired against a wall. No one was hurt, but officers from the Force’s Firearms Support Unit (FSU) were called to the site as a precaution.
A 34-year-old guy was arrested and is still in custody, assisting with investigations. Nevertheless, there is no threat to the general public, and it is thought that everyone engaged knows each other.