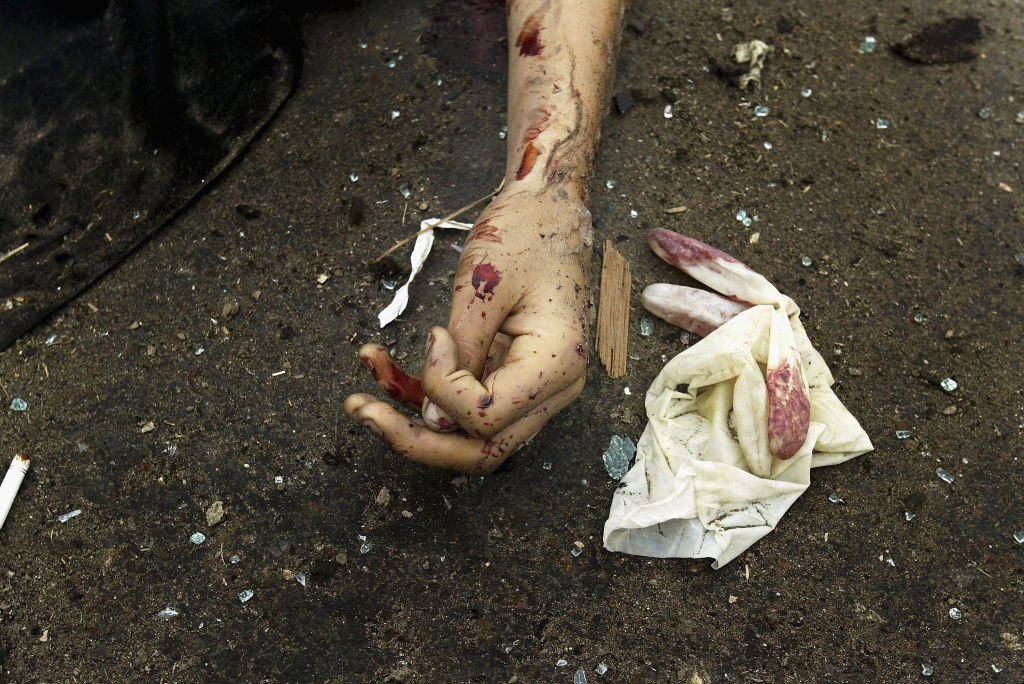 BAGHDAD, IRAQ - FEBRUARY 19: The hand of a dead Iraqi man is seen coming out from under a sheet at the scene of a bomb attack on Shiite worshipers February 19, 2005 , in the Khadimiya district of Baghdad, Iraq. The bus exploded near a barrier which was preventing vehicles from approaching a Shiite mosque in Baghdad's Khadamiya district, killing five people and wounding 46, police said. Dozens of Shiite's have been killed during the celebration of the festival of Ashura, the Shiites holiest festival. (Photo by Ghaith Abdul-Ahad/Getty Images).

Police reported Thursday that a corpse discovered earlier this month has been identified as missing graduate student Jelani Day. Last month, the 25-year-old was reported missing.

“At this moment there are more questions than answers surrounding Jelani’s disappearance and death, and that is where we will focus our energy,” Day’s family wrote in a Facebook post. “As of this moment, we do not know what happened to Jelani and we will not stop until we do.”

Bloomington Police Department tweeted that the LaSalle County Coroner used forensic dental identification, DNA testing, and comparison to authenticate Day’s identity. The cause of death has yet to be determined. According to CBS Chicago, officer John Fermon described the killing as “extremely suspicious” on Thursday.

The graduate student went missing on August 25, and family members said they last talked to him two days before in the late hours. According to authorities, he was last seen on August 24 at a Bloomington cannabis shop near the Illinois State University campus.

Day’s abandoned vehicle was discovered two days after he was last seen near Peru, Illinois, sparking a massive aerial and ground search by numerous law enforcement organizations in the region. On September 4, local authorities discovered a corpse floating along the Illinois River’s south bank.

Jelani Day’s mother has expressed her displeasure with the way police handled her son’s case.

On Friday, Carmen Bolden Day told CNN that the authorities had made no attempt to locate her son and that nothing was being done.

Day’s mother has been vocal in recent days. She was asking for assistance in locating her son after the outpouring of attention generated by the case of Gabby Petito, which highlighted discrepancies in missing person cases involving White people vs those involving Black and brown people.

Bolden Day added that everyone did all of the legwork, even those who had never met Jelani. She went on to say that her kid received no assistance at all. Bolden Day said that his kid was not deserving of such treatment.

Day was last seen on August 24, and his car was discovered a few days later, on August 26, near Peru, Illinois.

On August 26, a preliminary search was conducted. According to Fermon, the Illinois State Police conducted significant K-9 searches and drone aerial searches by local authorities and ground searches. He claimed that nothing was discovered at the time or in later searches.

Authorities returned on September 4 and discovered a corpse floating in the Illinois River that would eventually be identified as Day’s.

He claimed an autopsy was performed the day after the corpse was discovered. Still, the findings have yet to be released by the LaSalle County Coroner.

Authorities informed Carmen Bolden Day this week that clothing belonging to her son had been discovered on the Illinois River’s banks.

She claimed she asked about the findings of DNA testing when the coroner told her that he had finally received her son’s dental records.

A police officer “rudely” questioned Bolden Day whether she wanted to know if it was her son or not, she claimed.

According to Fermon, the hunt for Day encompassed ten agencies and specialist teams in the Peru region where the car was discovered and FBI support.

FBI Springfield spokeswoman Rebecca Cramblit stated that the FBI has been in contact with Bloomington police for many weeks about the Jelani Day case. She refused to disclose investigation facts that have not yet been made public.