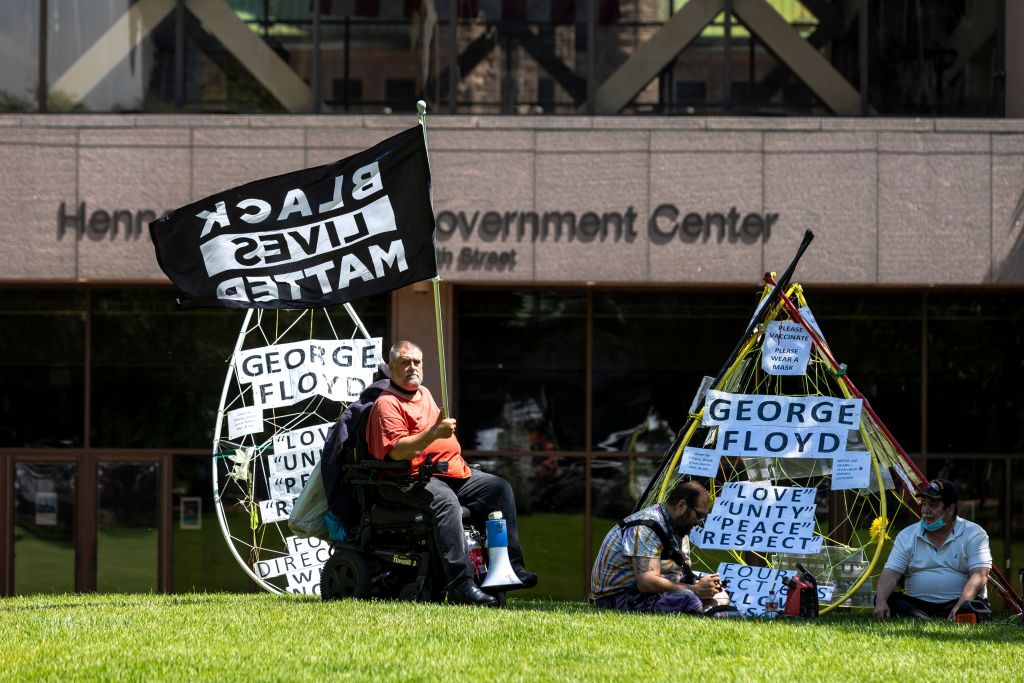 People gather before the sentencing hearing of former Minneapolis Police officer Derek Chauvin outside the Hennepin County Government Center on June 25, 2021 in Minneapolis, Minnesota. - Sacked police officer Derek Chauvin was convicted of murder and manslaughter on april 20 in the death of African-American George Floyd in a case that roiled the United States for almost a year, laying bare deep racial divisions. (Photo by Kerem Yucel / AFP) (Photo by KEREM YUCEL/AFP via Getty Images)

After a hearing on Monday morning, former Lonoke County Sgt. Michael Davis was released on a $15,000 bail. Davis was charged with manslaughter in the death of Hunter Brittain, a 17-year-old boy. No cameras were allowed in the courtroom. Still, the tiny room was packed with Brittain’s family on the left and Davis’ family on the right. 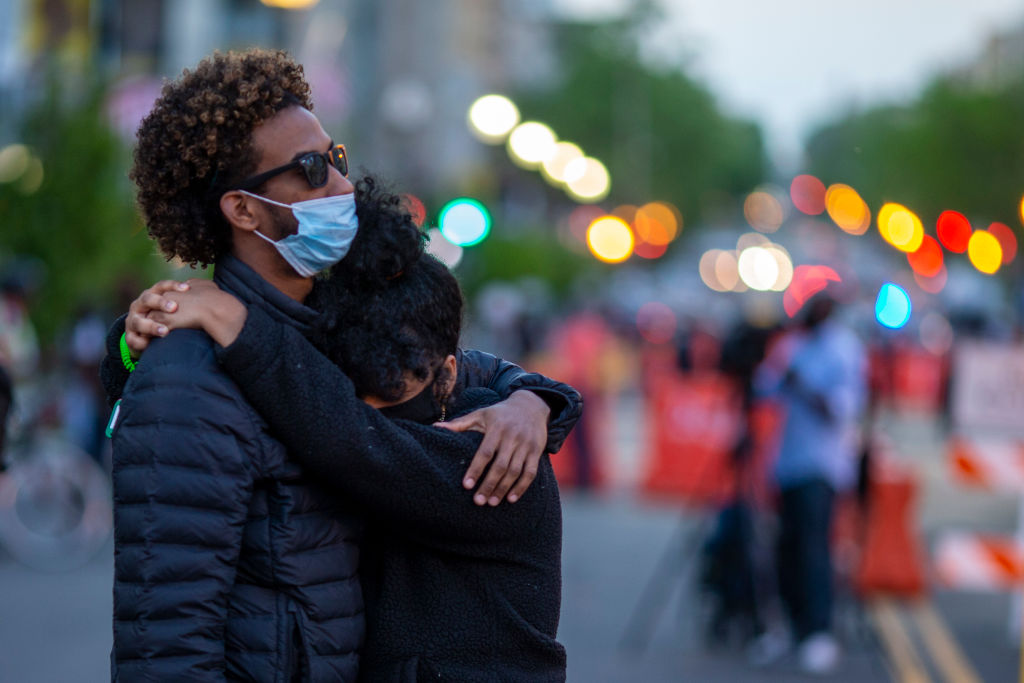 WASHINGTON, DC – APRIL 20: A couple embraces at Black Lives Matter Plaza near the White House on April 20, 2021 in Washington, DC. Former police officer Derek Chauvin was on trial on second-degree murder, third-degree murder and second-degree manslaughter charges in the death of George Floyd May 25, 2020. After video was released of then-officer Chauvin kneeling on Floyds neck for nine minutes and twenty-nine seconds, protests broke out across the U.S. and around the world. The jury found Chauvin guilty on all three charges. (Photo by Tasos Katopodis/Getty Images)

Ex-Deputy Charged With Manslaughter Out In Bail

When the teen’s relatives saw the man accused of the murder, emotions ran hot. Mary Robertson, Brittain’s aunt, hoped the guy would glance at the family and offer them some kind of regretful look, but he didn’t.

Davis’ bail hearing lasted less than 10 minutes and was quick and to the point. The $15,000 bail was agreed upon by both special prosecutor Jeff Phillips and Davis’ attorney Robert Newcomb.

Money, Jesse Brittain said, would not be able to bring his nephew back. “[It’s] going to cost him $15,000 to go home and be with his family while we’re at a loss. We’ll never have Hunter standing with us again,” he told THV11.

Newcomb requested that Brittan’s relatives not harass his client and his family during the hearing. Robertson was taken aback by the remark. They haven’t harassed her in her opinion. They had been sharing their feelings on social media, according to Robertson.

Davis’ relatives refused to comment on the matter, and neither attorney would speak to reporters. Meanwhile, Brittain’s family has said that they would continue to strive for justice.

After a special prosecutor filed an arrest warrant, Davis handed himself in on Friday, September 17. He may spend three to ten years in jail if convicted. Davis is scheduled to appear in court at 2:00 p.m. on November 15.

The full affidavit can be seen here.

UALR Public Radio said ex-Deputy Davis shot Brittain during a traffic check on June 23. Sheriff John Staley of Lonoke County dismissed Davis in July, claiming that the former deputy did not turn on his body camera until after the incident.

According to investigators, Brittain was carrying a container at the time of the shooting, and no weapons were found in or near the teen’s vehicle. Davis’ lawyer has said that the former deputy intends to enter a not guilty plea.

The Rev. Al Sharpton and two lawyers who represented George Floyd’s family paid tribute to Brittain. They said the teen’s death demonstrated the necessity for cross-racial cooperation in police reforms. Brittain’s family and friends have held frequent protests outside the sheriff’s office in Lonoke County, seeking more information about the killing.

Floyd died in May of last year when a white Minneapolis cop squeezed the detained Black man’s neck to the ground with his knee. His killing prompted widespread demonstrations against police and racial inequity.