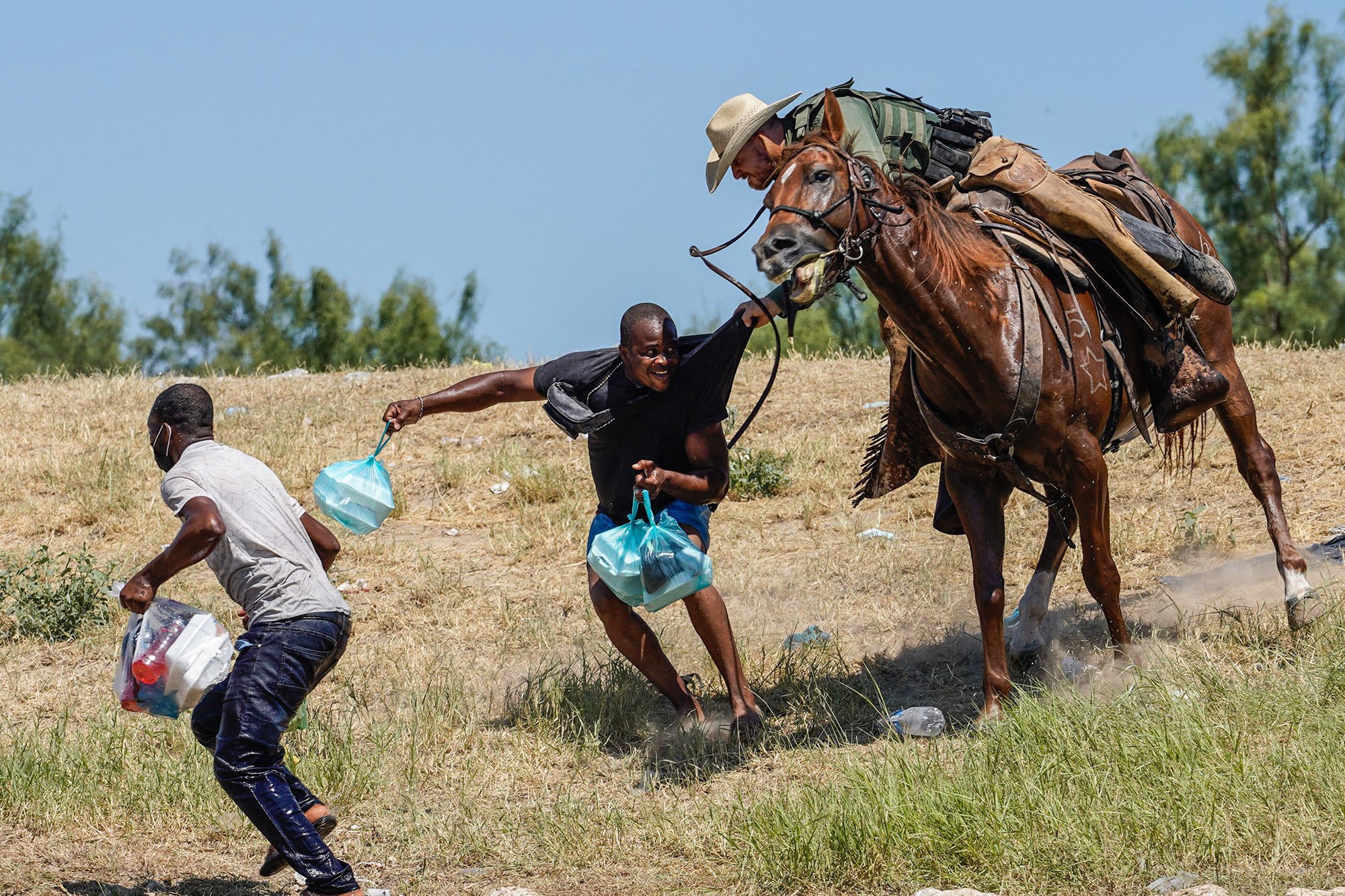 On the banks of the Rio Grande near the Acuna Del Rio International Bridge, a US Border Patrol agent on horseback tries to prevent a Haitian migrant from accessing a campsite. (Photo: AFP via Getty Images)

After photos emerged of a U.S. border officer on horseback rushing towards migrants at a riverbank camp in Texas, the White House condemned the use of horse reins to scare Haitian migrants on Monday.

In recent days, mainly Haitian migrants have been crossing the border between Ciudad Acuna, Mexico, and the vast camp across the border in Del Rio, Texas, to purchase food and water, which was in limited supply on the U.S. side. However, witnesses told Reuters that mounted police wearing cowboy hats were obstructing migrants’ movements, with one officer unfurling a lariat-like rope and swinging it near a migrant’s face.

U.S. Department of Homeland Security Secretary Alejandro Mayorkas firmly declared on Monday that the illegal trip of the immigrants would not succeed. Thus, they will be returning to their place. His announcement warns everyone, especially Haitians trying to enter the nation through the southwest border, per Houston Public Media.

Mayorkas’ remarks in Del Rio came as legislators and immigrant rights activists have criticized Border Patrol officers’ treatment of certain Haitians. Journalists’ photos and videos, which have gone viral on social media, show agents on horseback chasing and herding migrants trying to cross the Rio Grande, with one agent throwing his reins at a migrant.

Mayorkas denied whipping anybody on Monday but said authorities will “examine the facts.” On Monday, White House Press Secretary Jen Psaki condemned the agent’s conduct. Hence she asserted that she would never believe anyone who watched the footage would think that was normal or appropriate. 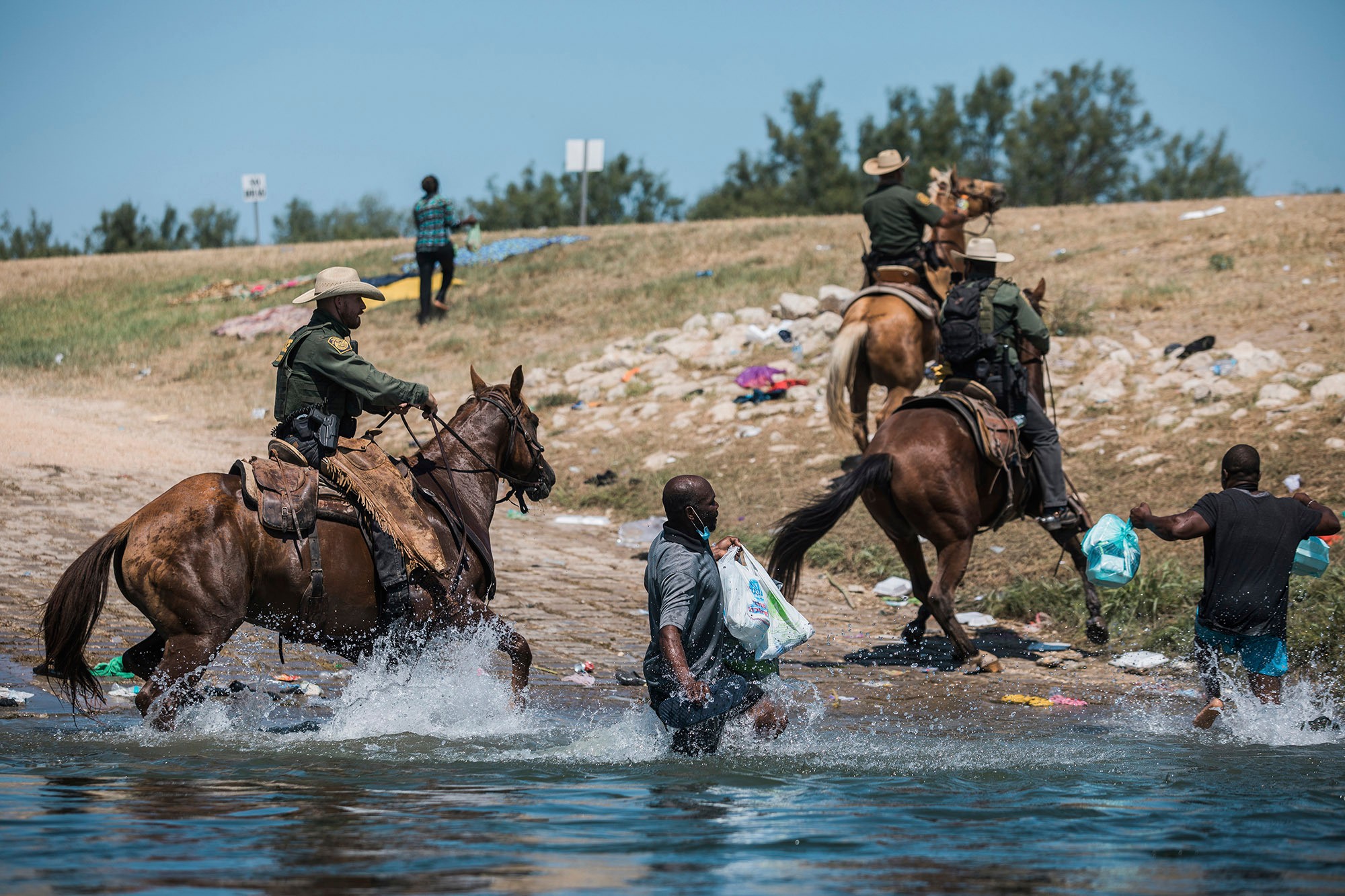 In a tweet, U.S. Rep. Veronica Escobar, D-El Paso, termed the agent’s actions “unacceptable.” In addition to her tweet, she also said that nothing justifies violence against refugees trying to seek asylum in the nation, no matter how difficult the situation in Del Rio is right now.

Furthermore, the agents’ conduct was compared by the Refugee and Immigrant Center for Education and Legal Services, a Texas immigrant rights group, to that of the Ku Klux Klan in the post-Civil War era. Hence, in a statement, Nicole Morgan, an attorney with RAICES, asserted that the demeaning and cruel treatment by the government via the employment of legislative and police authorities is not new to Black people in America.

The uproar comes as the federal government sends troops to Del Rio to cope with up to 15,000 migrants camping beneath the international bridge that connects the city to Mexico, seeking refuge in the United States. According to Mayorkas, 3,500 migrants have been relocated from Del Rio to other processing facilities to relocate another 3,000.

According to Val Verde County Judge Lewis Owens, some migrants have fallen out from exhaustion, and at least five have given birth at Del Rio hospitals due to a lack of food, water, and sanitary items. And on Sunday, repatriation flights to Haiti and other countries of origin began. The aim, according to Mayorkas, is to have one to three flights each day.

Why Haitians Choose Del Rio as their Entry Point?

According to Mayorkas, there is deportation on the majority of the migrants under Title 42, a pandemic health directive issued by the US Centers for Disease Control and Prevention last year to deport migrants to Mexico or their home countries without giving them the chance to seek asylum. Last week, a federal court barred the Biden administration from using Title 42 to deport migrant families, but 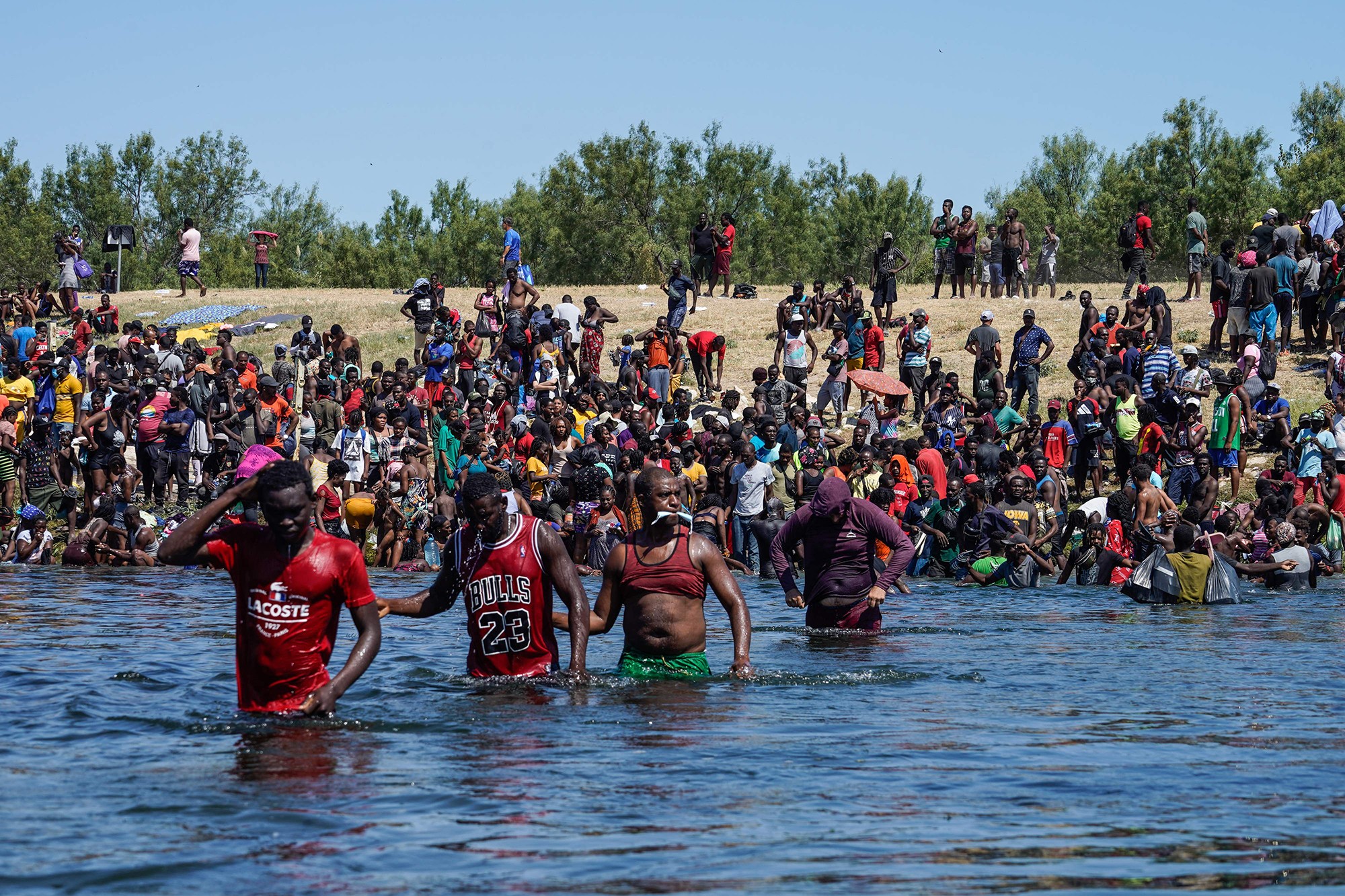 The Rio Grande River is being crossed by Haitian migrants who are part of over 10,000 individuals living in an encampment on the US side of the border. (Photo: PAUL RAT JE)

the decision was on hold for 14 days. On Friday, the Biden administration filed an appeal against the decision.

In August, Haiti was struck by a 7.2-magnitude earthquake, only a month after the exile of its president, the latest tragedy in a nation riven by political unrest and upheaval. Nonetheless, Mayorkas cleared things out that it’s not the way to enter America. They are apprehensive that Haitians attempting to cross the border illegally received false information that the border is open or that temporary protected status is available.

Following the murder of the president, several Haitians chose to leave the country, settling in South American nations such as Bolivia and Chile. Some of them are trying to re-establish contact with emigrant relatives in the United States. Yet, many migrants claim that they chose Del Rio as their entry point because it was safer than other areas of Mexico. Others claimed to be following the herd.