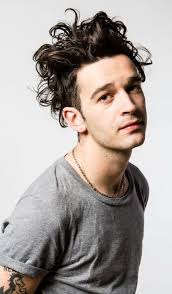 Matthew Healy is the lead singer, rhythm guitarist and pianist for the England based pop-rock band ‘The 1975’. From winning the ‘Q Awards’ and ‘Brit Awards’ to dating Halsey, Matthew has never been out of the headlines. Matthew is the songwriter for the indie pop rock band that hails from Manchester. The band has now gained a large fan following of young fans.Having a net worth of 15 million USD, Healy himself strongly supports the British Humanist Association and is active on Twitter and Instagram with a large following.

Matthew Healy was born in Manchester, England on April 8, 1989. His father, Tim Healy, was a television actor and his mother, Denise Welch, was a soap opera actress. Mathhew developed a liking to music at an early age of 4 and by that time, he was playing drums with his father. Matthew studied in Wimslow High School and as a result, he met Ross MacDonald, Adam Hann and George Daniel in 2004. They formed a group in 2002 and further, started playing together at local gigs. They started out with cover songs and Matthew was the main songwriter. The band started with the names of ‘Me and You Versus Them’, ‘Drive Like I Do’, ‘TALKHOUSE!’ and ‘The Big Sleep’ till they decided for the name ‘The 1975’.

He initially played drums for his band, but when his lead singer left, he eventually became the lead singer. Adam Hann was the lead guitarist, Ross MacDonald on the bass and George Daniel played the drums. Their first EP was ‘Facedown’ released in 2012, followed by the release of their second EP ‘Sex’. Matthew and his band made an international tour of Ireland and the USA to promote the album. They also toured UK and played at various festivals including a performance in the Royal Albert Hall. The band soon gained fame and played with the ‘Rolling Stones’ in Hyde Park. They also performed on stage at the 2013 Reading and Leeds Festival.