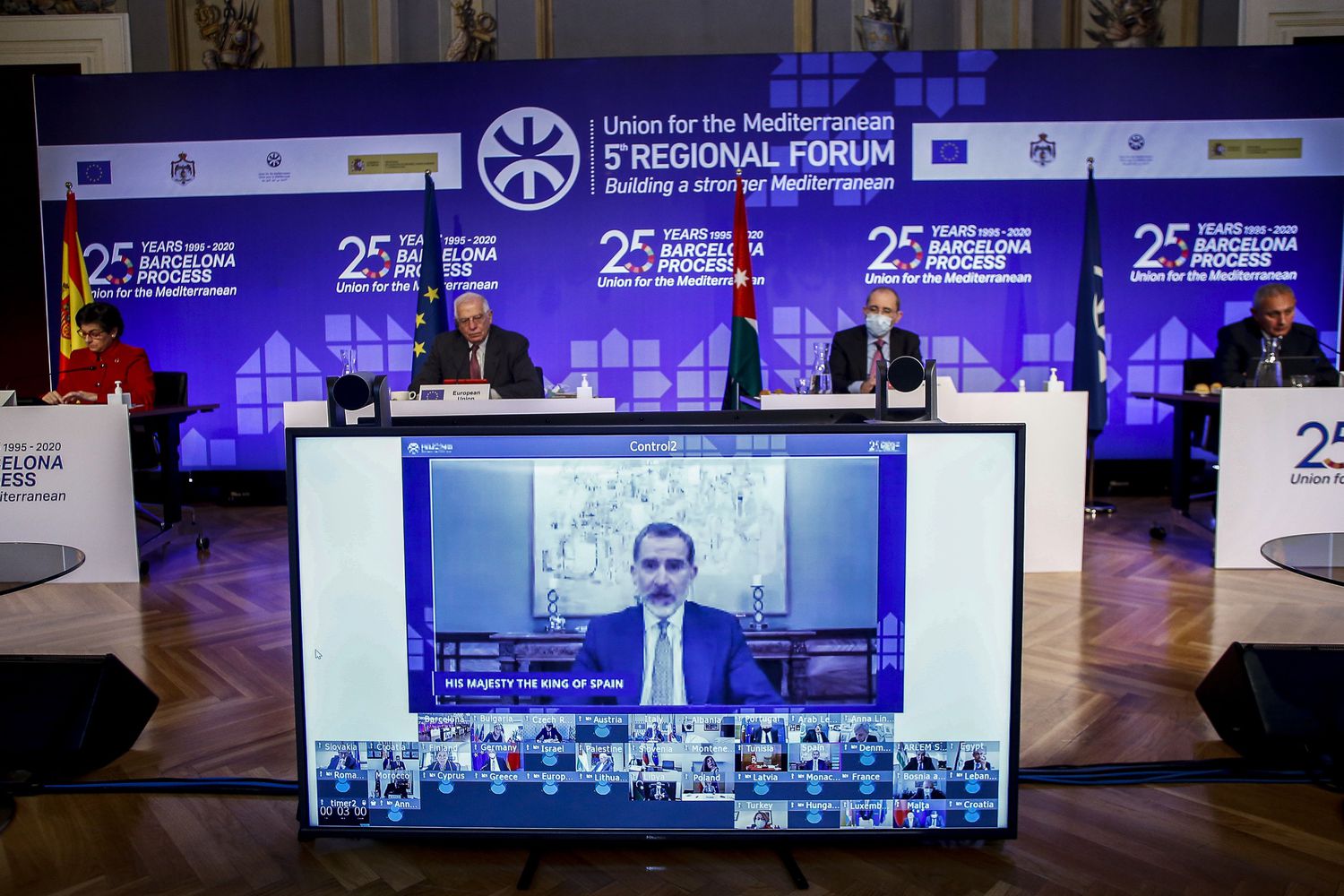 Felipe VI has tested negative for the coronavirus, as reported by the Casa del Rey. La Zarzuela has not specified what diagnostic test the head of state has undergone (PCR or similar) but it does, “following health standards”, will continue the quarantine that began last Monday until completing the 10 prescribed days, on Wednesday Of the next week.

The King maintained contact last Sunday with a person infected with covid-19 whose identity has not been made public.

This is the second time that it transpires that Felipe VI has undergone a coronavirus test. Last March, after it was learned that the Minister of Equality, Irene Montero, had tested positive, the Kings underwent a PCR, with a negative result.

However, Doña Letizia, who had shared an act with the minister, remained in quarantine.

The news was known hours after Felipe VI telematically inaugurated the V Forum of the Union for the Mediterranean (UfM), held in Barcelona.

The King has been seen sitting, wearing a blue jacket, a white striped shirt and a light blue tie, in an outbuilding of the La Zarzuela palace before an abstract painting, with good physical appearance and a clear voice.

The Monarch explained that his initial purpose was to personally go to the Pedralbes Palace in Barcelona, ​​where the forum is held, but his plan, “unfortunately, was frustrated by having to be confined preventively, due to the pandemic.”

In his telematic intervention, in which he has combined English and Spanish, the King has warned of the risk of the Mediterranean becoming a “fracture line” between two worlds, the north and the south, “increasingly self-absorbed and separated from each other ”; and it has recognized that the situation is today “more complex and difficult to manage” than 25 years ago, when the Barcelona Process, antecedent of the UfM, was launched.

The objectives that were set then ―to make the Mediterranean “an area of ​​peace and stability, of shared prosperity” – are far from being achieved, he lamented; and, in this quarter of a century, the regional situation has changed a lot, “not always in the best direction.”

An example of this are the “various conflicts and tensions that overlap and feed each other”, the “growing economic and social imbalances” and the “worrying cultural fractures that threaten to put at risk the very essence of the Euro-Mediterranean project”, which are now adds an “exceptional health emergency.”

Despite this, Felipe VI has called on the 42 UfM member countries (32 from Europe and 10 from the Maghreb and the Middle East) to overcome “discouragement” and “disinterest”; and he has appealed to “co-responsibility” and to have “clear objectives” so that the Mediterranean does not become an “increasingly unstable and unpredictable scenario”.

The pandemic has not only prevented the King from going to Barcelona in person, but has also limited the physical presence in the forum to the Secretary General of the UfM, the Egyptian Nasser Kamel; the head of European diplomacy, Josep Borrell; the Spanish Foreign Minister, Arancha González Laya; and his Jordanian counterpart, Ayman Safadi.

The rest of the participants, including the EU Commissioner for Neighborhood and Enlargement, Olivér Várhelyi, did so by videoconference. The King wished everyone “good health and success in their responsibility to ensure peace, stability, progress and the well-being of all the peoples of the Mediterranean.”

At the closing of the forum, the President of the Government, Pedro Sánchez, addressed the phenomenon of immigration, “which should be safe, humane and legal”, and stressed that it is “a shared challenge” for the northern countries and the south, which must be approached with “a genuine will to face its complexity in a global, joint, determined way” and “with a vocation to find solutions to its multiple dimensions”.