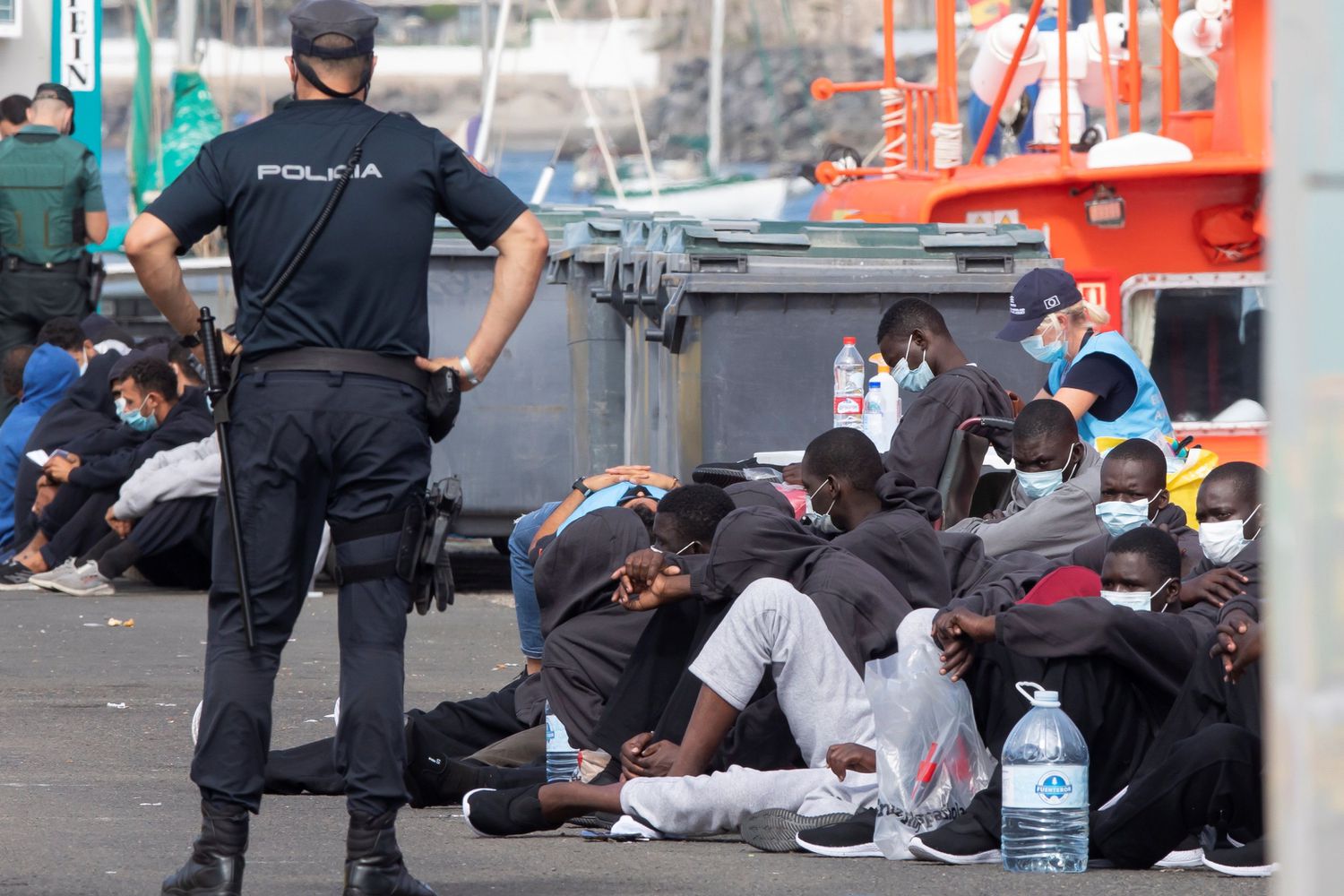 The Arguineguín dock continues to be the great black hole of the Government’s management of the migration crisis in the Canary Islands.

Four months after a little more than a dozen tents and a handful of portable toilets were improvised in those 3,800 meters to receive most of the migrants who try to reach the archipelago by boat, the camp is still standing and yesterday housed more of 760 people.

The latest notice has come from the Ombudsman who has asked the Interior for the “immediate closure” of the place where, he maintains, fundamental rights are violated.

The warning is contained in a document that the Ombudsman has prepared after the inspection that his technicians made of the place last week.

This document, which has not yet been made public, assures, according to Cadena SER and confirmed by EL PAÍS, that “the physical integrity of the migrants crowded there is being put at risk, which would constitute an attack against article 15 of the Constitution that ensures respect for physical, mental and moral integrity and that protects any person from suffering inhuman or degrading treatment.

Migrants who disembark in Arguineguín, where 2,600 people have been detained, sleep on thin blankets and eat just three snacks a day. They cannot clean themselves and live with coronavirus positives without any possibility of social distancing.

In the dock, as recognized by the Minister of Social Rights of the Canary Government, Noemí Santana, minors have also come to stay.

Another of the key issues during the visit was the verification that the migrants on the floor of the pier exceed the 72 hours of deprivation of liberty that the legislation allows without any judicial order to justify it.

The Ombudsman’s request for immediate closure is not binding, but it is a reminder to the ministry of its obligation to comply with the law.

The Interior Minister, Fernando Grande-Marslaska, came to assure in a television program on the 16th that none of the migrants spent there more than three days, a statement that has been denied by NGOs, lawyers, judges and journalists since the installation of the camp and that now also contradicts the Defender.

They do not go out because the agents only facilitate their transit if a relative goes to look for them,

Yassine Esadik, a 23-year-old Moroccan man, is now at liberty in a reception center in the center of Las Palmas, but, according to his account, he spent 20 days sleeping on the asphalt of the dock between October and November.

“Of course he was being held, nobody could leave until they transferred us, nobody informed us that we were free,” he says. Esadik says that when he was locked up for more than two weeks, he joined another group of Moroccans to protest to the police.

Each held up a piece of paper on which they had written the date they had arrived. “Nobody paid any attention to us,” he recalls. “There we slept on top of each other, it was very cold, we were hungry. I had a very bad time ”.

The installation of tents on the dock at the beginning of August was a temporary alternative to the police stations where the return orders of immigrants who enter Spain irregularly are generally identified and processed.

It responded not only to the upturn in arrivals (more than 19,000 so far this year) but to the health emergency situation that, as the police unions warned in May, prevented keeping newcomers in jail. Temporality became normal and the dock has become the image of the management of the migratory crisis of the Executive of Pedro Sánchez.

The first public complaint of how the migrants spent days in the open did not take long to arrive: on August 6, when it was still a lot with three precarious Red Cross tents, it was learned that a group of 71 people spent more than three days there thrown away until they were taken to a shelter .

In these months, MEPs, local and regional authorities or the UN Refugee Agency (Acnur) have walked through Arguineguín and all have agreed on the terrible situation of the place.

The conditions of the dock were also witnessed by the Minister of Inclusion, Social Security and Migration, José Luis Escrivá, and Grande-Marlaska himself, accompanied by the European Home Office, Ylva Johanson.

On October 28, the mayor of Mogán, the municipality where Arguineguín is located, denounced the conditions before the courts, but the investigating court dismissed the case because it understood that “the facts denounced are irrelevant for criminal purposes.”

The judge did emphasize that the situation in which the migrants are on the pier is “deplorable.” The Canary Islands Prosecutor’s Office has appealed the file of the complaint.

Sources from the Grande-Marlaska department have stated that they will respond in a timely manner to the Ombudsman’s reminder.

The minister himself had already announced the dismantling of Arguineguín in “a few weeks” on November 6, hoping that the installation of a new camp in the old Barranco Seco powder magazine, with a capacity for 900 people , would resolve the situation.

But the new camp has been in operation for more than a week and the soil of Arguineguín continues to serve as a bed for hundreds of people.

\The lawyer Kabir Vaswani, a member of the Governing Board of the Gran Canaria Bar Association, left the pier yesterday after attending to one of his clients who had been there for 14 days. “I have explained to him that he has the right to leave, but the problem now is that he has tested positive for coronavirus.

I take it for granted that it has been infected there, ”he says. On paper, he explains, migrants cannot be detained, but in practice “they have exceeded 72 hours of police custody and many rights have been violated.” Lawyers on duty shift, Vaswani says, are insisting on informing migrants that if they are not released, they have the right to leave.

“If they want to do it and they cannot, they will have to request habeas corpus,” he says.