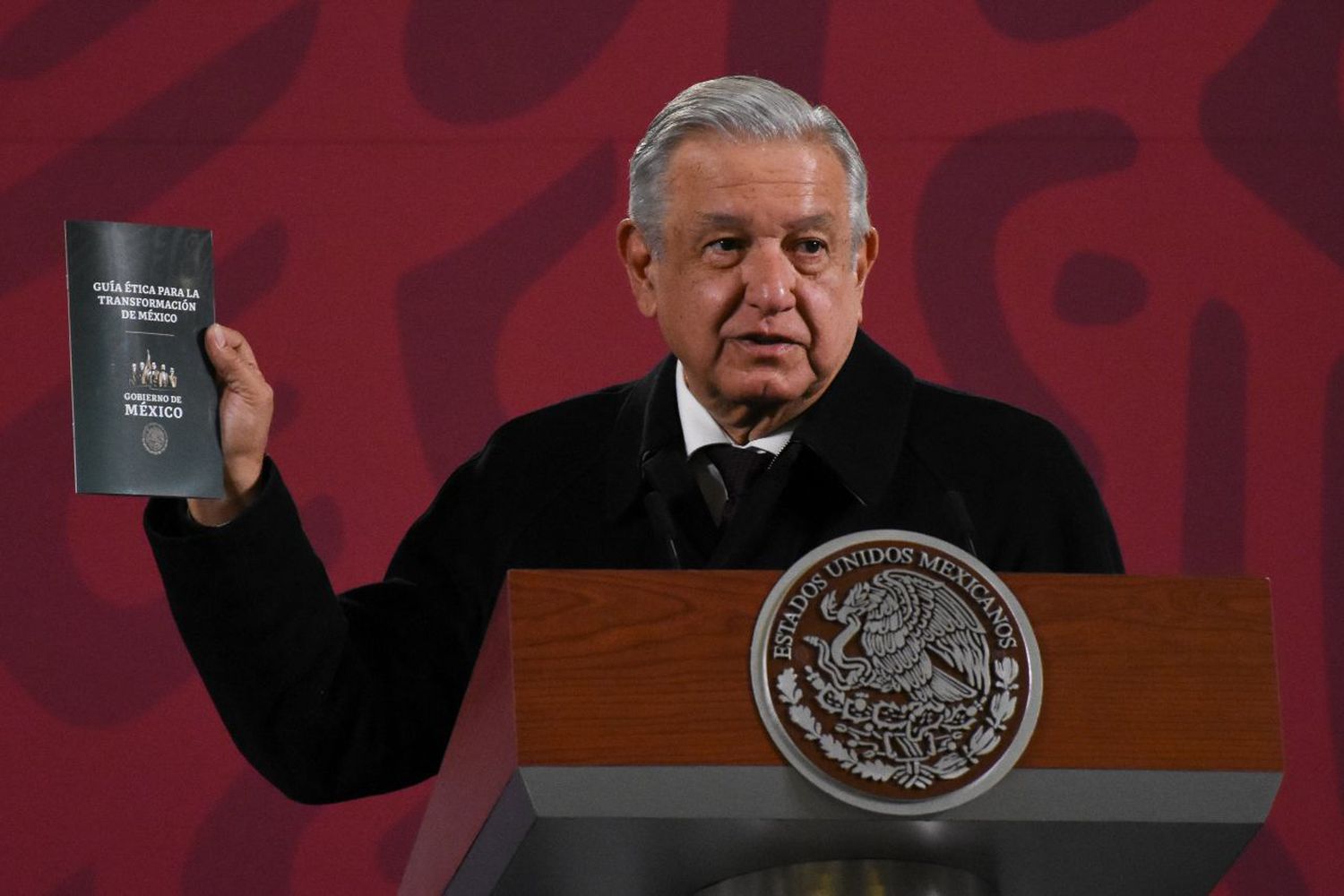 President Andrés Manuel López Obrador presented his Ethical Guide for the Transformation of Mexico on Thursday , one of his government promises, which was initially called the Moral Constitution, a term that has been discarded because it mixed public and private spheres.

But that controversy persists in this matter. The guide consists of 20 articles that teach about universal principles such as respect for difference, life, freedom, love, forgiveness, equality or redemption, but also the economy, work or authority and power.

It was born of the repeated conviction by the president that society “has lost cultural, spiritual and moral values” to plunge into “degradation and decadence”.

The document, of which 10 million copies will be printed for grandparents to analyze these principles with their children and grandchildren, sees the light after various forums for dialogue between civil institutions, universities and 18 churches.

It is inspired by the famous Moral Primer by Alfonso Reyes, from 1944, then commissioned by the Ministry of Education as an accompaniment to a literacy manual.

The president already commissioned a few years ago to the philosopher and theologian Enrique Dussel, among others, a similar primer for his mandate, which was even printed. Its dissemination was within the scope of the Morena party.

It is a tradition in Mexico to handle public policies with a moral horizon. In 1992, while Ernesto Zedillo was Secretary of Education, another 700,000 copies of Reyes’ booklet were printed, but he withdrew due to pressure from the union, according to an article by Rodrigo Martínez Baracs, a well-informed historian at the National Institute of Anthropology and History , because his father was the promoter of that new edition.

Some renowned philosophers now cross that text as “defective, dualistic and macho”, but others do not agree with the current one, not so much because the values ​​that are poured into it are not acceptable by Tyrians and Trojans, but because of the relevance that emanate from a public authority, these being moral principles.

He considers this manual to be more of an “idea” by the president. “Our freedom of thought is already guaranteed, since 1215 already in England,

Aware of the quicksand of this debate, both López Obrador and those in charge of drafting this text, have repeated this Thursday that it is not a question of dictating rules to anyone, “which is not a law, nor something that the Government wants to impose on the society, families, schools, companies or unions ”, just to summon Mexicans to collect their opinions and ideas.

This has been pointed out by the economist and columnist Enrique Galván, one of the authors together with the social anthropologist and writer Pedro Miguel , the president’s Chief of Communication, Jesús Ramírez, the journalist Verónica Velasco, the Economic Law teacher José Agustín Ortiz Pinchetti and the philosopher Margarita Valdés González.

Unequivocal proof of the president’s desire to publish this text can be found in some parts of the wording where phrases are read that the president regularly repeats in his conferences: “on the margins of the law, nothing; above the law, nobody ”.

Or that of “everything for reason and law; nothing by force ”. Or his insistence that “the family is the main institution of Social Security in Mexico.”

“It seems that the president’s collaborators seek the mechanisms to fulfill what he says and end up squaring the circle, but this is nothing more than a call to mass and fortunately we are still in a secular country.”, Criticizes the researcher Gómez Gallardo.

“Another thing,” he says, “is that a broad debate on institutional values ​​was opened, dealing with corruption, for example, but from a public policy perspective,” he adds. “But the authority is not there to dictate consciences and there is a danger that these texts end up establishing univocal truths that eventually become restrictions on plurality,” he warns.

“This text seems, in any case, something innocuous, where people related to its ideology have participated, it is not a comprehensive debate, it is rather a homily, there is no diagnosis or prevention policies according to it, it is nothing more than a style of government marked by symbols of the past, a management style of a particular person, the president ”, he adds.

Although the values ​​in the guide are universal and easily accepted, there are some guidelines that could potentially create controversy. Not so much for what is said, but for the opportunity to say it. This is the case of the chapter on equality when it mentions that “eradicating machismo and violence against women does not mean discriminating against men.”

There is no shortage of people who think that women having been discriminated against for centuries, and even now in a dramatic way, there is no need to prevent discrimination against men. This point especially irritates the academic of the Colegio de México Roberto Breña, who complained several times about the scarce mention that women find in this text. “In 20 points, the serious situation that women go through in Mexico is dispatched in half a paragraph. Talk about love, forgiveness,

Breña is especially concerned that many of the values ​​included in the guide, with which he generally agrees, cannot be developed, because “the Government has not set the conditions for it. How to have peace and freedom, how to put all that into practice, and I go back to women, if they can hardly go out on the streets?

How in a country where insecurity is enormous is it barely mentioned , when the main mission of a State is to provide security?

The delivery of the current guide has not been easy. In 2012, when López Obrador was campaigning, he brought together a group of experts to write a moral primer. The philosopher Gabriel Vargas Lozano was one of them.

They worked three months on it and delivered the text, “but the president did not like it, he wanted something simpler for the people, not so much an analysis of the ethical problems of Mexican society.” Then [in January 2019] he printed millions of copies of the Reyes primer, a document already outdated in some respects, even incomplete for its time.

“Reyes does not speak, for example, of the problems of women, not even of the World War that was being fought at that very moment. It is already overrun, but [the president] spread it ”, adds the philosopher.

On the current guide, Vargas Lozano, from the Department of Philosophy of the UAM Iztapalapa thinks like all those consulted. There is a narrow line between what is public and what is private that this text does not make clear and that the 20 articles are nothing more than “Kantian ethical principles of should be that anyone would subscribe to.

But there is no deep analysis of the bottom of the problems ”. It lacks greater insight into the chapter on dignity on the centuries-long mistreatment of indigenous peoples and the whys; the little emphasis that is placed on Mexican secularism:

“In fact, in the text there is confusion about that, and it cannot be that the State adopts the positions of 18 Churches.” Colonialism and its consequences are not mentioned either, he says. “Not the terrible violence that plagues this country.

It is not enough for this to say ‘be good’, an analysis and a solution are needed, with moralistic preaching we will not achieve anything. There have been many catechisms in this country and the problems were not solved ”.

The chapters in which mention is made of public policies, such as the environment, for example, or when justice is mentioned are also the object of analysis: “It is not enough that there are laws for there to be justice, there must be institutions attached to the law. legality and public servants willing to comply […] ”.

When he talks about citizens having to “maintain a participatory, critical and vigilant attitude towards the rulers” or when he mentions work and wages, or poverty. Experts consulted see some of the government’s own shortcomings, as if it were teaching itself.

“It seems that the State gave up on certain policies. Transform Mexico? This is done with public policies, not with moral guidelines ”, ditch Roberto Breña.

The Ethics Guide collects excerpts in some of its articles like these that are summarized here. On freedom “To exercise your freedom it is necessary […] for the State to guarantee your safety, your integrity and your life.”