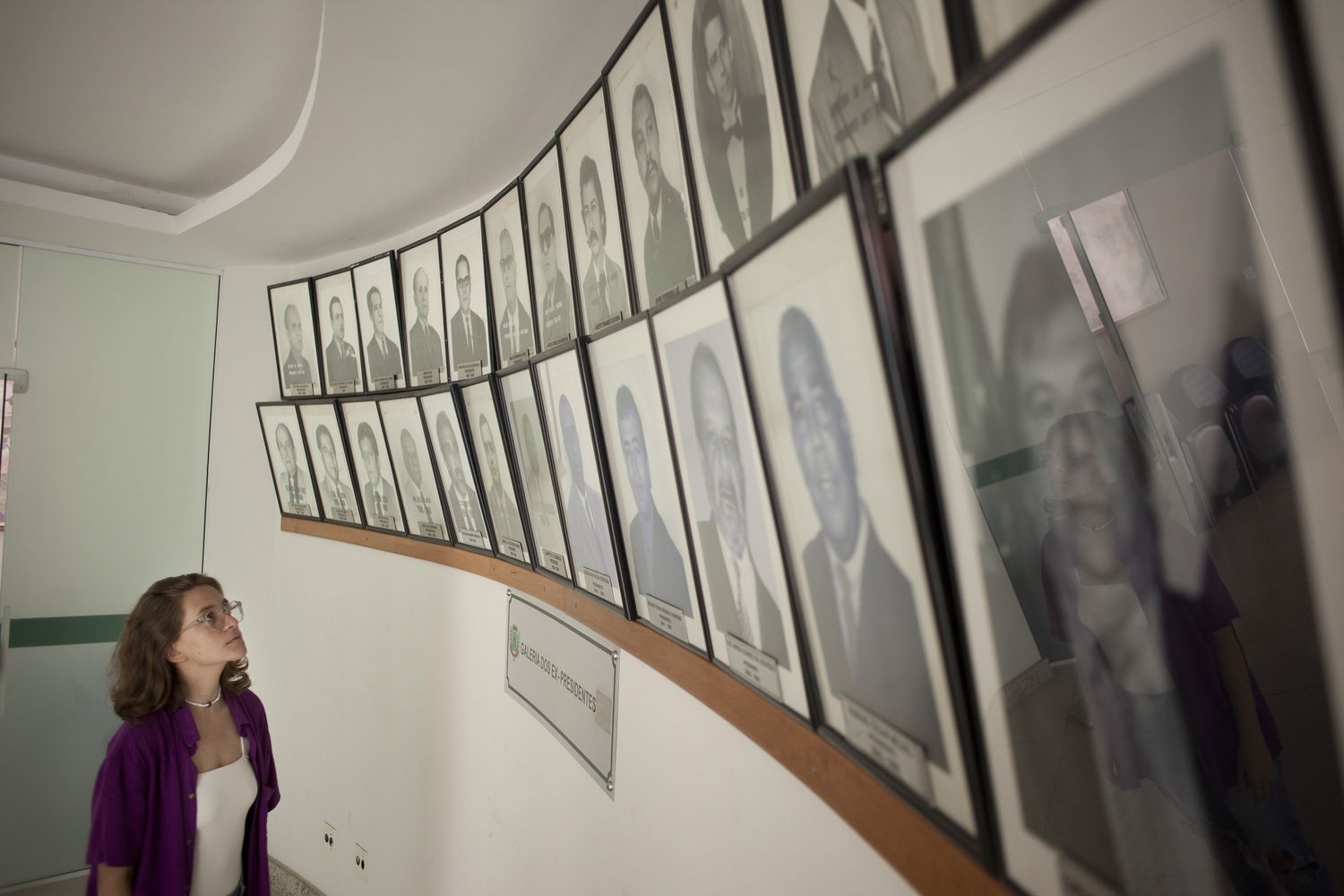 The last councilor of Tres Ríos ended her term 70 years ago. Professor Alva Coutinho belonged to the first plenary session of the City Council of this city in the interior of Rio de Janeiro, near Petrópolis, a traditional resting place for the emperors of Brazil.

Since then all the councilors and mayors have been men, as reflected in the black and white photos of the hallways of the Town Hall. But a couple of weeks ago the neighbors promoted a small revolution because in the recent local elections they elected four women among the 15 councilors.

The effusive congratulations with which the protagonists are received on Monday in the street give an idea of ​​the caliber of a change that has left them stunned. And exultant. Bia Bogossian, a 23-year-old journalist and entrepreneur, made that historic event – 70 years without a councilor – one of the axes of her campaign. And, seeing the result, it hit the spot.

After an unsuccessful first attempt at 19, he prepared himself thoroughly, including courses in London and Barcelona. The reward was 1,097 votes that make her the most voted councilor in this municipality of 82,000 residents. Bogossian was confident of her triumph, she explains, but feared she would be the only one.

And it turns out that when he takes office on January 1, he will have Ana Clara Araujo, a 25-year-old black social worker, the animal activist Ana Carolina Junqueira (35) and the businesswoman Jacqueline Costa (52) by his side.

The Tres Ríos was not such an atypical case. One out of every five consistories in Brazil is managed exclusively by men. That is why the female landing is a historical event in this conservative city, with a coffee-growing past and installed in a railway junction.

As Bogossian recalls, a woman stands out among the founders of the city. The Countess do Rio Novo bequeathed her lands to her slaves after arranging for them to be free upon her death at the end of the 19th century.

But the spectacular progress here is not a true reflection of how Brazil was after the first round of the municipal elections, on the 15th, in which the electorate punished President Jair Bolsonaro and rewarded the right for life. The national increase in female councilors was timid, from 13% to 16%.

“At this rate, we will only have parity between men and women in municipalities in 56 years,” warned a demographer.

The striking increase in transsexual councilors (with 30 elected) and black women in the capitals largely overshadows what is in fact a slow advance of women in Brazilian politics . “Any increase must be celebrated. But the main change is qualitative.

Chambers that did not have any women chose women; others who did not have black, chose black and many trans people came out. This shows that there is a change in the electorate, which elects representatives more similar to the population, “says political scientist Hannah Maruci.

Slight increase and from a low threshold. When compared to the municipal power that women hold in the rest of the world, Brazil is one point below Afghanistan, according to the Council of Foreign Relations’ Power of Women index .

Although he gave women the right to vote in 1932, on two occasions he elected a president and there are gender quotas (which are not met), they are around 15% at all levels, from municipalities to Congress.

The main culprits are the parties, according to experts. The resistance of the white men who dominate the political formations favors that the progression is at a snail’s pace. Not even the quotas in force for 30 years can with them.

They systematically mock them with all kinds of tricks including fraudulent nominations. The most obvious , when neither the candidate votes for herself.

“In quantitative terms, we expected a greater advance given that there is a 30% quota”, says Maruci, who highlights: “Some even manage to get elected despite the parties.”

The political scientist belongs to La Tienda de las Candidatas , a group of volunteers who have trained ten women in this campaign and who aspire to break the systemic machismo of the parties. Two of them have been elected despite the fact that their parties did not put a hard on them. None is innocent. Not even the one with the most elect , the leftist Socialism and Freedom Party (PSOL). Thais Ferreira, 32, a women’s health activist sponsored by this initiative, has managed to be elected in Rio capital after financing the campaign with a crowdfunding. She is the only black PSOL councilor in the city.

Back in Tres Ríos, Bogossian’s jovial youth, clad in a suffragette purple camisole and jeans with huge holes, contrasts with the understated portraits of the men who have led the city’s destinies for the past seven decades. Among them, a great-great-grandfather of his who presided over the municipal plenary session in 1947, that of the pioneer Coutinho.

When asked why she chose to place the historic absence of women at the center of her campaign, the millennial first gives the manual answer. “For a question of representativeness”, she starts to tell later the fear that her father would go through if she attended the plenary sessions because they were late, it was dark, it was far away. The typical. And then the spontaneous response arises: “We are 52% of the population of Tres Ríos, and we have no councilwoman!” It is anachronistic to him. The explains, local revolution due “to the mileniale s are more aware generally grow both the left and the right.” Half of the new corporation are rookies.

This woman who defines herself as the center-left insists that she does not want to be from a single flag. Economic reactivation and sustainability are also priorities. He explains that the next mayor will have to manage “a great gift” to the public in the form of oil royalties .

“The inspection is going to be key,” he warns. It also wants the City Council to achieve carbon neutrality , as it wanted to do with its electoral campaign. Now he is looking for time to plant 107 trees to offset his CO2 emissions.

After posing for photos (the fourth councilor did not come because she was ill) the activist Junqueira ran off to the police station “because a neighbor has hanged a dog,” she says. He says that “before he tried to poison him, he was a pit bull.”

There are poor people who vote for people who perpetuate inequality. I vote for this one because he is a friend, a neighbor, he puts a stopper on my door or cuts a tree in front of the house. Politics here is considered help, there is no ideological debate ”, he laments. He is ambitious to change it.

Bogossian waived public funding for his campaign, which was paid for by three donors. The main one, his father. She is a student of the political renewal movements that have proliferated in Brazil in the heat of popular discontent with traditional politics and the corruption that drove the Workers’ Party from power and elevated President Jair Bolsonaro.

Financed with donations from individuals, they carry out mass selection processes in which they choose candidates from across the political spectrum and train them on how to build their speech, their team or their program.

The young councilor of Tres Ríos will resume classes ( online) the following days. The agenda includes, among other matters, how to select the three advisers that correspond to him, a question that raises enormous suspicions among the veterans of the City Council, who try to make him desist.

All life has been handcrafted. But she insists on examining them and applying fees. “We need good politics, neither new nor old,” she says, looking forward to one of the great gaps in Brazilian politics.

The 81-year-old retired Joaquín Pereira is one of those Brazilians extremely disenchanted with politics, so much so that while having a coffee in the mall, he openly replies that “we should end this business of the elections.” Yes, you have heard something that they have elected councilors.

“It will improve because there have already been many men and they did nothing. They only know how to steal, ”he roars.

A few steps away, Mrs. María Mariano Prudente, 60, scrubs the floor. He voted, but only for the mayor “because he was on duty, working, he did not know the number (of candidacy) of the councilors.

But I think it’s perfect that there are women because we have many needs for employment, health, pleasure. But knows? I think they had to be older to make people firm ”