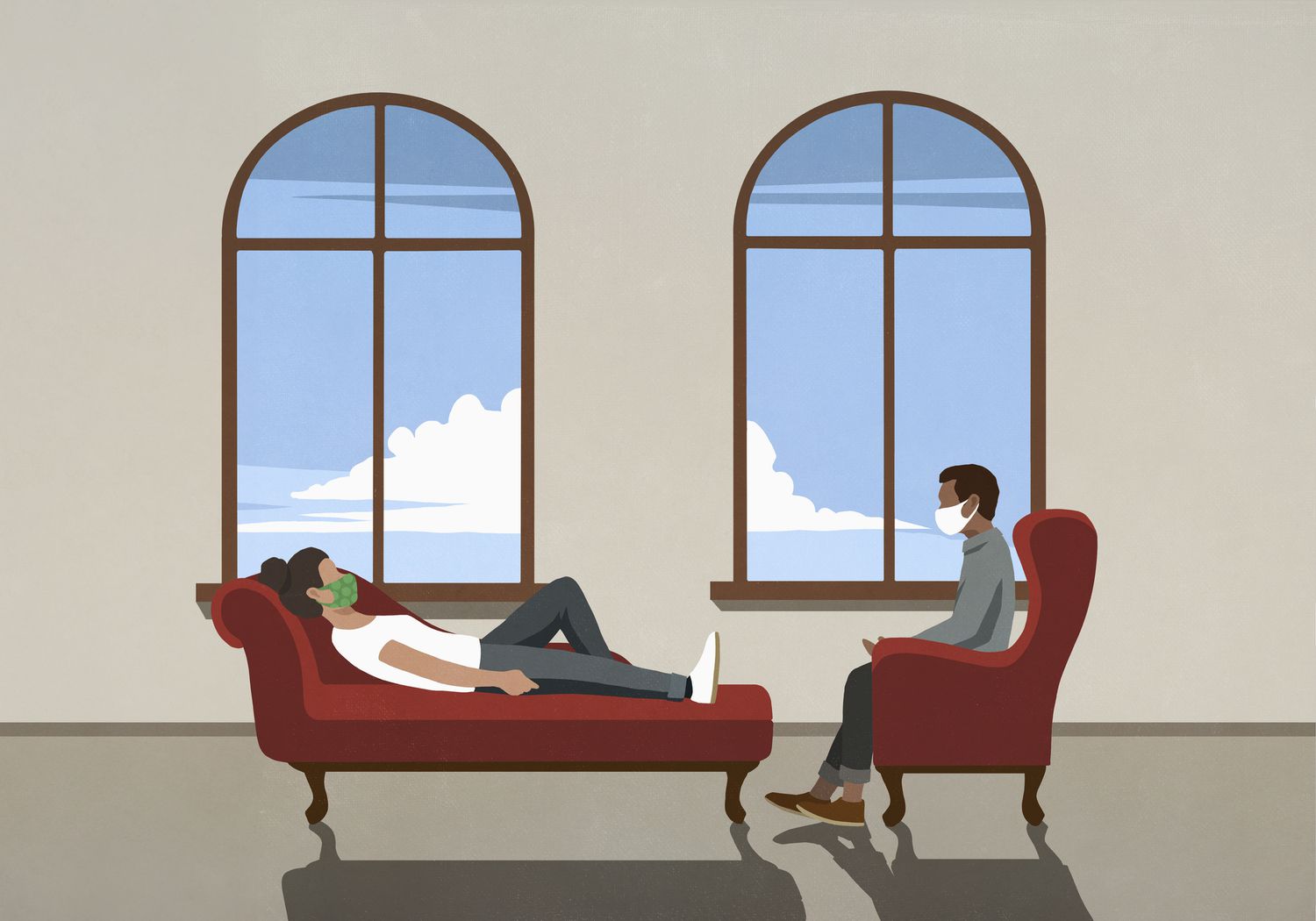 Since the covid began to spread claws, we have not stopped praising, with absolute justice, the work of doctors, nurses and assistants.

All of them have left their skin fighting against the ravages of the pandemic – many have lost their health, and even their lives.

But there are other health workers who have also worked tirelessly to heal the open wound caused by the coronavirus. They are the psychologists. How has peering into the upset inner worlds left by the pandemic affected you? Are you prepared for the wave of mental health problems that is coming?

“There has been a unique situation, at least in our field. Normally we work from our perspective and experience but, in this situation, patients and professionals were under the same roof: we all suffered from the pandemic .

It is not the same to work a duel with an affected person – no matter how much you also have duels – to being in the same place with the same circumstances as him ”, reflects Ignacio Blasco, a psychotherapist who works with minors at risk of social exclusion and a group of affected by compulsive gambling.

In the case of professionals who, like Blasco, turn to groups that already have strong problems prior to the pandemic , the challenge of care during this time is even greater. But the truth is that, in these circumstances, not only your patients need help.

“We are the professionals and we have to maintain the frame and the therapeutic work, but we have double difficulties, because this has caught us on the wrong foot and under the same anguish.

For a psychologist who works with the suffering of others, self-therapy is fundamental and something that has particularly helped me a lot is the supervision groups, in which we meet with colleagues to think and talk a little about how we are, what that we feel, we can share some case, some experience… ”.

The weeks of total confinement was very hard for me to go down the street, totally alone and surrounded by police cars and ambulances.

He would arrive at the hospital and he knew why the world had stopped. The situation was very hard, but you activated and kept working, there was no other

Violeta López de Lerma is one of the five members of the team of psychologists at the Rey Juan Carlos de Móstoles Hospital in Madrid. Until the virulence of the coronavirus prevailed, his job was to care for those patients whose illness had led them to develop symptoms such as anxiety , fear and anguish.

She also participated in so-called outreach programs, working hand in hand with other areas to treat, for example, eating disorders. But, when his entire hospital was devastated by covid-19 income, his attention focused on helping the health workers themselves , their colleagues.

“We began to see clearly that they were facing a totally unknown situation and many traumatic experiences. People told you ‘this is like coming to war’ because there was a lack of means, a lack of personnel, a feeling of loss of control when suddenly changing all the roles …

We realized that they would begin to present symptoms of anxiety and stress sharp and we said ‘here we have to help out.’ And they do it like that. They got down to work and designed, together with 300 other psychologists from Madrid, a crash plan to take care of the caregivers.

They established two support groups, one in the morning and one in the afternoon. To their surprise, not a single paramedic approached them at first.

They did not come because they could not stop, for sheer lack of time. The solution was to go directly to those places where doctors, nurses and other health personnel had a short coffee and provide care right there.

Basically, they helped them understand that the symptoms they presented were “normal and expected”, and gave them strategies “to help them stop thinking a bit and lower their more physiological activation, with which they left work and arrived at it.”

The result, says the professional, was satisfactory: at the end of the improvised sessions, the health workers thanked them for their work and the anguish, or some of it, dissipated. “ We also applied what we said to them, self-care from the basics: doing physical exercise to release tension, taking breaths to lower the level of activation … ”.

The other great leg of his work during the first wave was to attend to the relatives of the people who had passed away, a difficult mission that they faced paying special attention to ensuring that the duels did not become more complicated than they should:

“When someone gets sick, usually the The family is with him and attends the process, and this allows the family member to get used to the idea of ​​what may happen and, where appropriate, allows him to say goodbye.

But the covid put on the table a situation that we do not normally face, the isolation of patients”Explains López de Lerma. The work of her and her companions then went through collecting their pain and accompanying them in traffic.

“I remember the case of a young boy who lived with his grandparents. He was the first to fall ill, then his parents and grandparents fell, and his grandfather died. The guilt of this boy was very great, and our role consisted in helping him work through that guilt, anger and helplessness that he feels in a situation like this … “.

“It is very hard for everyone to be losing the power to decide. There is a lot of demotivation, apathy, hopelessness, feelings of helplessness … There are no magic formulas, but of course you can’t pretend to be happy if you don’t feel that way ”

López de Lerma and his colleagues continue to address the mourning of the relatives of those who die in their hospital, but also patients who have overcome the disease with sequelae that significantly reduce their quality of life.

The feeling of uncoat has not disappeared, and experience has taught them to approach their obligation with certain precautions .

“Interventions with health personnel were always done as a couple, which allowed that, if at a given moment the intensity of the session was very strong, one could lead the way and the other support. And at the end, to be able to share that experience, something basic that allows us to digest what happens to us ”, says the professional.

It seems they are going to need every lesson learned. “The WHO says that by 2030, mental health will be the first public health problem in the world, and I believe that the covid has stepped on the accelerator even more.

We are not yet clearly seeing the effects, we are beginning to see them, but there is going to be a rebound in mental disorders. We began to detect previous pathologies that have been exacerbated by the situation of isolation, by the social and economic situation we are going through… This is an important part of the socioeconomic crisis. And there we will be more necessary ”. But are they ready?

“Our mental health services in the public system are very deficient. The attention given to mental health from the public is insufficient , ”says López de Lerma. A person takes about 3 months to get to the psychologist for public health, he calculates, and there are people who do not even know that there is public psychological care.

“If we could address the problem that it presents in time, we could prevent its aggravation. Nor is the periodicity adequate for quality therapy: maybe we can see him every month and a half or two months ”.

It is not surprising that private consultations are overflowing, more now than during the first wave. Everyday life has lost its daily veil, and this has made a dent in people who already had previous ailments, but it has also pushed others to seek care.

“One of my patients the stress caused by the confinement situation, added to his previous conditions, led him to injure himself,” says Alejandra Berbel, general health psychologist, who remarks that the lack of freedom has destabilized a large part of her patients. and that it is now, precisely, when it is most accused.

“I had a patient who lost a loved one and had another in hospital for a long time. Transmitting calm there is very complicated. People were very afraid, very hopeless: they were living inside a nightmare. There I did see very difficult situations and I myself felt affected ”.

Berbel is also a child psychologist, and has seen first-hand the effects that the pandemic has had on minors: “ I had patients who were comfortable at home and who did not want to go out when they began to leave them , underlying that was fear because been two full months without stepping on the street.

I have also found profiles of more fearful and obsessive children, who went out and were blocked. They went to the park and did not know if they could touch the sand, or not approach the swing … “. Given that, it has had the complicated role of instilling confidence (remembering all the security measures).

The overload and stress of the situation, new to everyone, has passed a toll on psychologists for which many, like Alejandra, go to therapy. “It helps me to clean, to oxygenate me and to be able to digest so much load”, He says.

Although it is a common practice for these professionals since long before the pandemic arrived. It is essential and almost all currents contemplate it because taking care of themselves is essential so that they can continue to undertake their work.

But mental health professionals also have their demands for society to take care of them: the increase in PIR positions and the ratio of clinical psychologists are among the main ones. They need to be heard, now more than ever. They are responsible for stopping the other pandemic: that of the silent pain and bitterness that the covid leaves us.