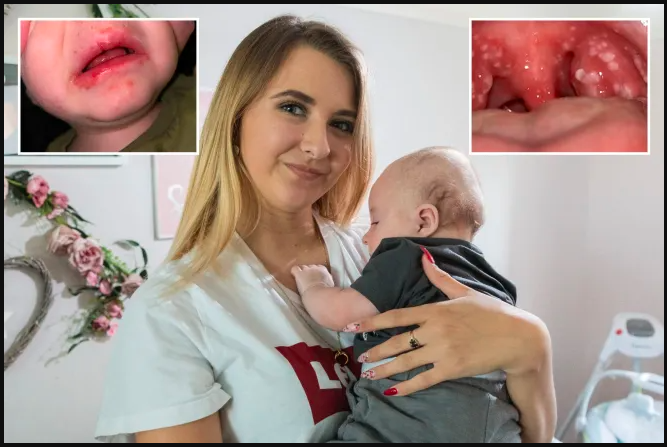 Mother carrying her youngest child battling Strap A with inset of mouth sores image. (Photo from The US Sun)

A mother with two Strep A-infected children advised other parents to check for symptoms.

Aimee Byron said her three-year-old son Jamie Jones got exhausted and cried out in pain, holding his head and stating he felt “tickles in his neck.” Drew, her 17-month-old, got unwell a few days later. The 22-year-old warned parents after another child died from the epidemic yesterday, Dec 6, 2022, reported The US Sun.

Read Also: $1,500 Bonus Checks For Residents In Arkansas, Will You Receive It?

Mother carrying her youngest child battling Strap A with inset of mouth sores image. (Photo from The US Sun)

A five-year-old girl was hospitalized last week, according to BBC. She died yesterday after treatment there.

With her death, nine children have perished from this virus, which normally causes a sore throat and fever but can be deadly.
Muhammed Ibrahim Ali, four, lives in High Wycombe, Buckinghamshire, and Hanna Roap, seven, in Penarth, Vale of Glamorgan.

A stay-at-home mom Aimee said she is happy her sons are at the opposite end of the scale, but it might have been worse.

Jamie had tonsillitis, according to Aimee.

She returned to the doctor after a few days. He was diagnosed with Strep A and hospitalized.

Streptococcus A (Strep A): How to Deal with It

A Strep A, or Streptococcus (GAS), is a skin and throat bacteria. These microorganisms can cause sickness. mild sore throat or”strep throat” and impetigo/cellulitis are frequent symptoms of GAS infection.

GAS spreads through close contact with someone who has it. Coughs, sneezes, and wounds can also transmit it.

Some people can carry the bacteria without becoming ill or showing indications of infection. Still, they can transfer it, but the chances are significantly higher when someone is unwell.

The infection can happen if a person has open wounds or sores that allow germs to enter the tissue, holes in their respiratory tract after a viral disease, or a health condition that makes them less able to fight off infections.

NHS Inform suggests that you call your doctor if your child:

If your doctor’s office is closed, call 911.

If you suspect your child is critically ill, trust your instincts and seek medical attention.