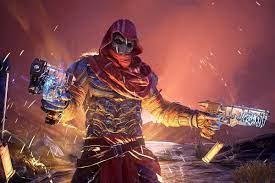 Outriders might look like a similar game that you might have played earlier. But this is a sci-fi, third person game where you have to shoot more! However, there are a number of peculiarities that make this loot-shooter more complicated than it seems.

There was an energetic launch of Outriders last weekend, where the server issues were addressed and the producers decided to apologize by distributing in game gifts to the players.

Therefore, the producers gave “Free Appreciation Package” to the players who patiently dealt with the server issues! All those players who played this game in between the date of 31st March to 11th April will be receiving this free in app gift.  In an update to the game’s reddit on Thursday, the studio announced the reward for gamers.

Although, the developer announced that they are giving away gift packs, but the arrival date of the gift package is yet to be announced. The admissible players will be receiving unique gifts like Endgame Titanium currency, Unique weapons or Frustrated emojis.

Since server down during a game is really frustrating, the developers declared that frustrating emoji was already decided to be released and it was coincident about the situation and gifting of this emoji.

The reward will be only given to highest level characters of game. Higher the level of the character higher the Endgame Titanium currency will be rewarded to the players. The whole issue about the server being down is provided on the reddit, which explains how and what went wrong. Moreover, the developers apologized and thanked the players for showing patience during the server down situation.

More details about the Free appreciation package will be released soon along with the date of arrival of the rewards. Further updates will be provided through the tweets on Twitter. So, the players are asked to remain alert for the tweets!