Harris took part in a YouTube video for World Space that was released Thursday. (Photo: NASA)

Vice president Kamala Harris appeared in ‘Get Curious with Vice President Harris,’ a video that premiered Thursday to commemorate World Space Week — and received backlash on social media for her wide-eyed exclamations about space’s wonders, per Daily Mail.

In a video from the Naval Observatory, where the vice president’s residence is located, Harris gushed dramatically to a group of five kid actors. While discussing the video with fellow conservative Candace Owens on tonight’s Fox News talk show, Tucker Carlson described it as “false” and “fraudulent.”

Carlson stated that they are not going to play that footage for humanitarian reasons, but it’ll be available online. Moreover, he also said to look it up and keep an eye on it if they dare. “Watch it again. Watch your own soul die as you do. It’s the fake is thing that’s ever been caught on video but in fact it’s even faker than it looks,” he remarked.

Furthermore, he then chastised Harris for using child actors rather than kids who are interested in the space sector. Thus, he asserted that they found out that one of the kids Kamala Harris was scolding isn’t a regular kid; he’s a child actor named Trevor who auditioned for the part. Other conservatives flocked to Twitter to chastise the vice president for her over-enthusiasm for the kids. (Photo: Yahoo)

No political party that believed in democracy and believed it had to win over votes no matter what put up someone like Kamala or Kamala Harris for office, according to one observer. Moreover, other conservatives flocked to Twitter to chastise the vice president for her over-enthusiasm for the kids.

On Twitter, Donald Trump Jr claimed Harris’ “commitment to cringe is truly impressive,” while American Conservative Union chair Matt Schlapp tweeted, “Too much DayQuil.”On the other hand, Representative Lauren Boebert of Colorado said caustically that she’s not permitted to speak to adults anymore.

At one point in the video, Harris bursts out laughing, wide-eyed with awe at what her visitors would see through the high-tech telescope at the Naval Observatory. ‘You guys are gonna see, you’re gonna literally see the craters on the moon with your own eyes!’ she said, pointing to her peepers for emphasis – even though the moon’s craters are visible to the naked eye.

Despite her position as chair of the Space Council, Kamala Harris was criticized in a NASA space video for being too dramatic and lacking a deep understanding of space travel. (Photo: NASA)

Harris Aimed To Unravel the Unknown

Earlier in the film, Harris, who has been the chair of the cabinet-level National Space Council since May, struggled to articulate reasons for space research. She further said that there are other things that they haven’t figured out or discovered yet; she adores the thought of how much there is out there that needs to be unraveled.

The vice president’s aides and supporters shared the video online, which had received 114,000 views on YouTube as of Monday, with 2,000 likes and 4,100 dislikes. The ability to leave comments has been disabled.

Canada’s Sinking Ship Entertainment, a foreign film production firm, created the video. The cost of manufacture is unknown. On the other hand, the children that took part in the event were ecstatic to be there. According to California station KSBW, these were young actors auditioning for roles in the videos. 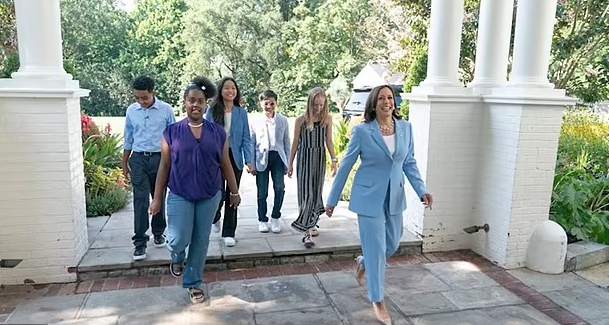 Harris was interviewed by child-actors during the video. (Photo: NASA)

Trevor Bernardino, a 13-year-old Monterey native, told the station that he was a space enthusiast who auditioned for the position, only to be surprised when he learned he would be coming to Washington, DC, to be in the film. He auditioned by sending in a monologue and three questions that he would ask a world leader.

Bernardino was one of five teenagers who took part. Derrick Brooks II, a child actor, Emily Kim, a child actor, Zhoriel Tapo, a child actor and aspiring journalist who has interviewed former First Lady Michelle Obama, and Sydney Schmooke were among those who joined him. Meanwhile, Shane Kimbrough, a NASA astronaut, took part in the International Space Station.

On October 7, Harris shared the video via Twitter. On the other hand, Bernardino, for his part, was delighted to meet Harris. According to him, meeting Vice President Harris was undoubtedly the most thrilling part; she sat them down, she has a lot of charisma. He also said Vice President Harris is everything he imagined her to be, and then some.

Bernardino explained how he wound up in the video, “Me, my mom, dad, we were speculating who could be this important that we meet them in D.C., and we get to go on cool trip and film.”

When the youngsters in the movie discover they’ll be meeting with Harris, one of them exclaims, “Are you kidding me…the head of the space council is the vice president!”