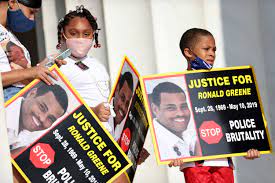 5 Louisiana police officers were convicted for the death of a Black driver they arrested in 2019. It was noted that these officers previously blamed car crash as the cause of the victim’s death, says newsbreak.com. On December 15, 5 Louisiana police officers were convicted of negligent homicide and malfeasance following the arrest of Ronald Greene, 49, in 2019. These officers previously blamed car crash for the death of Greene. However, body camera video showed that Greene was beaten, stunned, and dragged around by the said officers. The case received only a little attention until an investigation by the Associated Press revealed the truth. This triggered an investigation against top Louisiana State police officers, an evaluation from the U.S. Justice Department, and a legislative inquiry about what Louisiana Governor John Bel Edwards knew about the case.

Charges Against the Police Officers

According to newsbreak.com, the officer who faced the heaviest charges from Louisiana’s Grand Jury is Master Trooper Kory York. York was seen on the body camera video to be dragging Greene by the chains around his ankles, stepping on Greene’s back to force him down, and leaving the man face down on the ground for almost ten minutes. Experts say those actions could have possibly restricted Greene’s breathing and may be considered “torture and murder.” York was convicted of negligent homicide and 10 counts of malfeasance.

The four others were also charged with different counts of malfeasance and obstruction. One trooper denied the existence of the body camera video. Another overstated Greene’s resistance. A regional state police commander allegedly claimed that detectives pressured them not to make an arrest. Lastly, a Union Parish sheriff’s deputy was heard on the video taunting Greene as they “tortured” him. Union Parish District Attorney John Belton already issued arrest warrants for all of the five officers. According to him, the people have already spoken and commended the grand jury for hearing the evidence.