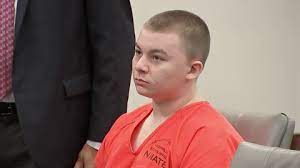 Judge Smith denies the motions filed by the defense team of Aiden Fucci, the teen who stabbed cheerleader Tristyn Bailey 114 times to her death in Florida years ago, says Bradford. In May 2021, Tristyn Bailey, 13, was stabbed 114 times to her death in St. John’s County, Florida. Bailey’s family reported her as missing at 10 a.m. on the morning following her death. This prompted the 16-hour search for Bailey. Her body was later found by a neighbor in the woods near her home in Durbin Crossing. Police identified the suspect as Bailey’s former classmate Aiden Fucci, then 14. A knife was found near the pond where Bailey’s body was found. This triggered the arrest of Fucci on May 10. Fucci was charged with murder but has pleaded not guilty, says Fiorillo.

Fucci’s defense team reportedly tried to transfer Fucci, now 16, out of the Duval County prison where he’s being detained. His lawyers claimed that Fucci has received threats in prison while he’s alone for 24 hours every day. However, the team’s request was denied because St. John’s County doesn’t have a detainment for teens. Rob Hardwick, the St. John’s County Sheriff, also claimed he didn’t want Fucci to transfer jails because the boy had apparently “lost the right” to demand where he will be locked up.

Fucci’s lawyers also made an effort to move the location of the trial despite the worry about the jury’s neutrality. They believed Fucci cannot receive a fair trial. However, Judge R. Lee Smith guaranteed that the concern will be revisited if an unbiased jury cannot be found, as reported by Bradford.