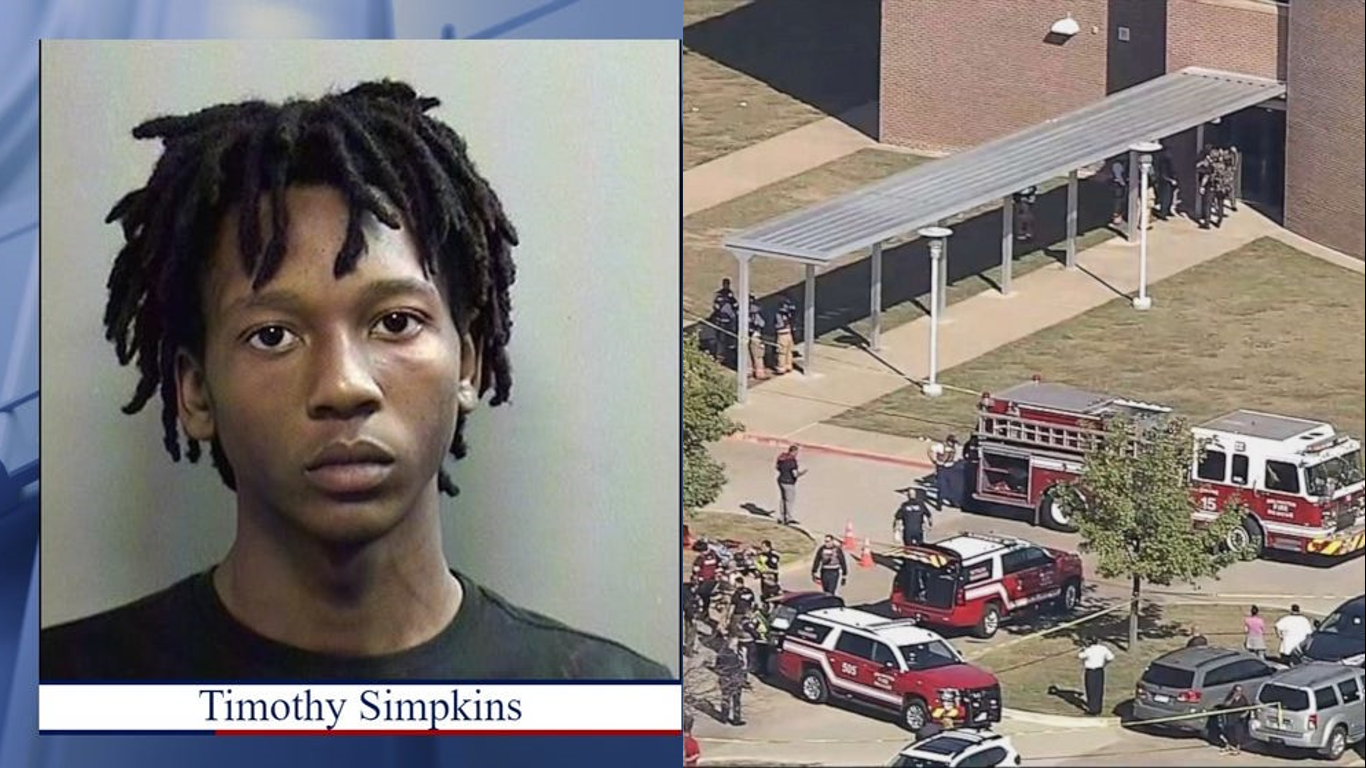 ARLINGTON, Texas – A suspect was arrested in connection with a school shooting at Timberview High School in Arlington on Wednesday morning, injuring four people. (Photo: Fox4)

On Wednesday, a shooting that happened at Timberview High School in Arlington caused several injuries.

Authorities said a suspect who escaped after opening fire inside a Fort Worth-area high school, sending students and staff fleeing for their lives, was apprehended Wednesday following an hours-long search, per Fox News. Timothy George Simpkins, 18, has been identified as the suspect. (Photo: Fox4)

The 18 year-old Suspect was Arrested

A fight broke out inside a classroom at Timberview High School about 9:15 a.m., according to cell phone footage acquired from a student. Timothy George Simpkins, 18,  pulled a firearm on Wednesday. He was last seen driving a 2018 Silver Dodge Charger as he departed the area.

Furthermore, according to authorities, Simpkins was apprehended after a search and anticipated facing three counts of aggravated assault with a dangerous weapon. Officials said investigators were questioning him on Wednesday afternoon. Thus, he is bound to appear in front of a court on Thursday. Additionally, according to Arlington police jail records, he is detained on a $75,000 bail. 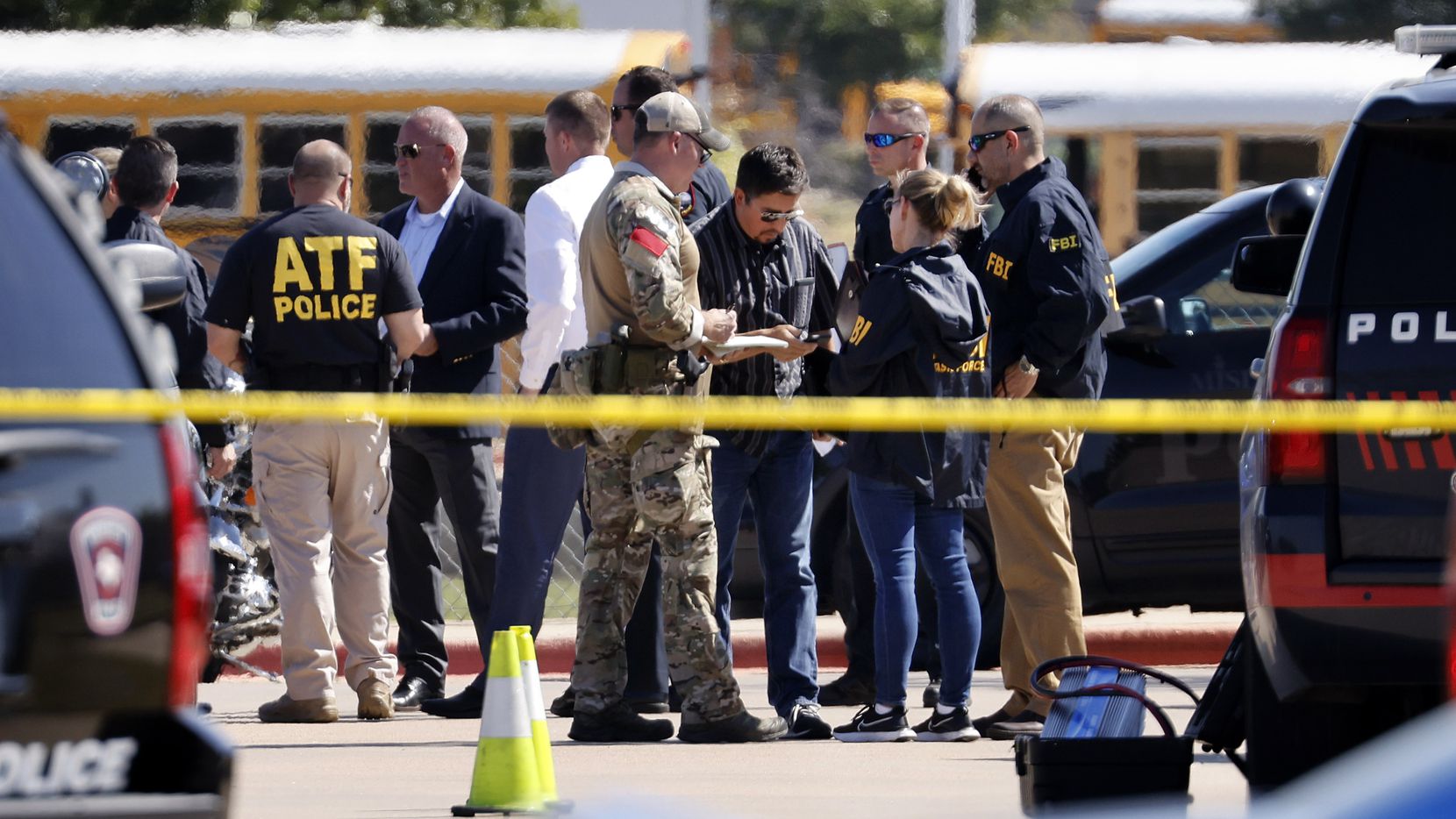 People gather on a road leading to Timberview High School after a shooting at the school in south Arlington, Texas on Wednesday. Authorities immediately investigated the event. (AP Photo/LM Otero)

Multiple persons were injured, according to law enforcement, and some were taken to local hospitals. Moreover, according to Fox station KDFW-TV, three people were brought to hospitals, two of whom had gunshot wounds and were having surgery. In addition, a 15-year-old kid in critical condition, a 25-year-old guy in excellent health, and a teenage girl in good condition are among the wounded.  Also, a pregnant teacher was wounded in a fall, according to the news source, and was treated on the scene.

Over the phone, Arlington Mayor Jim Ross told Fox News that two people were still in surgery and the third had been treated and discharged. While officials processed students from the school, parents waited four miles away at a performing arts center. In the future, students will be bussed there to reconnect with their families.

According to Texas Governor Greg Abbott, who addressed at a separate news conference on Wednesday, it is illegal for the shooter to own or obtain the handgun used in the Timberview High School tragedy. Ross went on to add that the suspect owned a firearm on school premises without permission. Nevertheless, the mayor is confident that the law enforcement will find and apprehend him.

According to new regulations that went into effect on Sept. 1, only persons aged 21 and over are permitted to carry in Texas openly. 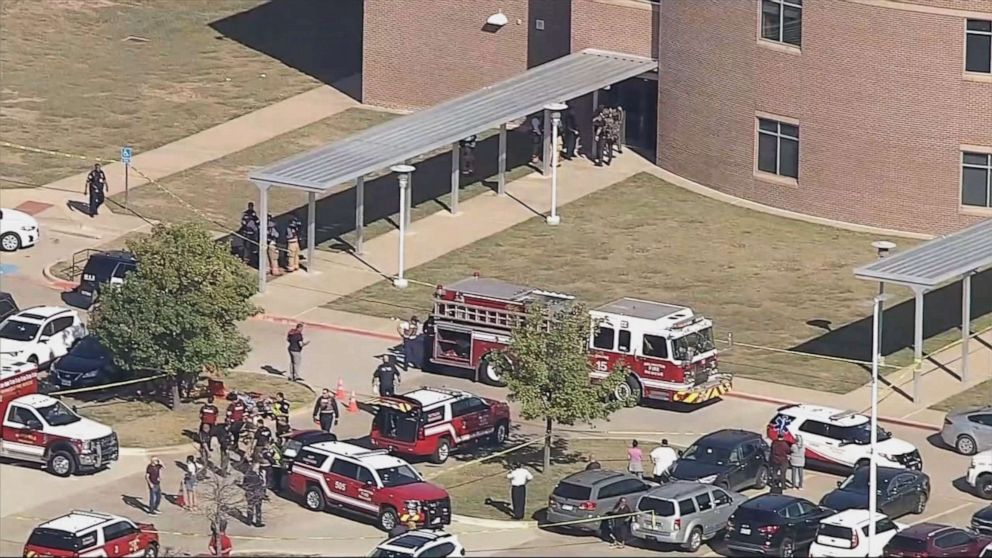 Timberview High School in Arlington, Texas. On Thursday, there will be no school for kids. There will be counselors accessible. (Photo: WFAA)

The School will Provide a Counseling Services for Students and Parents

A Mansfield Independent School District spokesperson confirmed to Fox News Digital via phone early Wednesday morning a “police problem” at Timberview High School. She also said that the school is on lockdown. Thus, children and staff are in their classrooms and offices, and no guests are being permitted for the mean time. However, she declined to offer any further information at the time.

On the other hand, the school district issued a statement Wednesday afternoon stating that the “all clear” had been granted at the school. Parents or guardians of students from Timberview and Early College high schools were requested to pick up their kids at the Mansfield ISD Center for the Performing Arts while students were being led aboard buses.

On Wednesday, all after-school events were canceled. Hence, according to the school system, counseling services will be provided to children and parents at the reunification location.