2 Children and Their Father Struck by Car on "National Walk to School Day" in Wheeler Road and Mississippi Avenue in Southeast D.C. (Photo: Megan Rivera/Twitter)

A vehicle struck two children and their father in a crosswalk as they were participating in National Walk to School Day on Wednesday morning.

According to Metropolitan Police Department’s 7th District Watch Commander, Two young children, ages 6 and 8, participated in National Walk to School Day with their father when they were struck by a vehicle around 9:30 a.m. on Wheeler Road and Mississippi Avenue SE. Police said the three were in a crosswalk with the walk light on when the incident has occurred.

According to D.C. Fire Department officials who responded to the scene, the three were all taken to the hospital, where one child reportedly suffered severe injuries. The other child and the father suffered from non-life-threatening injuries and are now recovering.

Authorities stated that the suspect, a woman driving a Jeep Grand Cherokee, stayed on the scene and willfully cooperated in the investigation. In a report from WUSA9, the woman is now facing multiple charges, including driving without a permit. 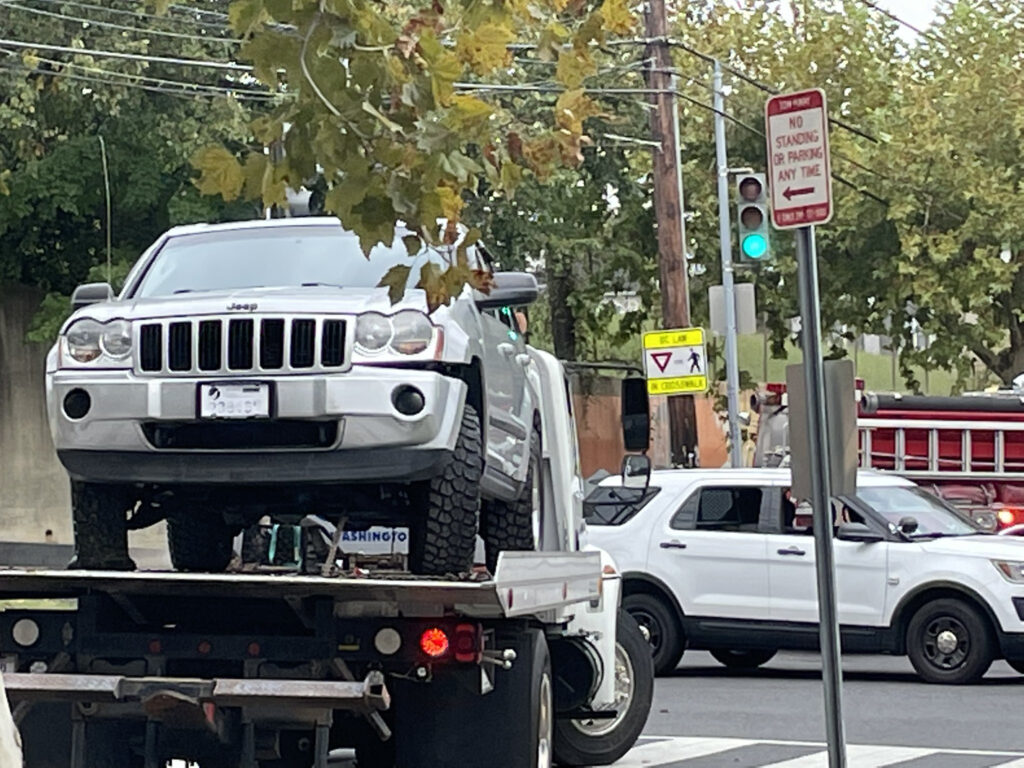 The vehicle that hit the family is being towed away; there appears to be some front end damage to the Vehicle (Photo: Megan Rivera/Twitter)

The investigation is still ongoing; Police, however, believed the woman driving the Jeep made a left turn and hit the family. There is a speed bump roughly 50 yards away from the stoplight before the turn.

Wheeler Road and Mississippi Avenue SE, the intersection at which the crash took place, has been a known crash hot spot.

Since 2017, the DC Vision Zero data shows that more than a dozen accidents have resulted in injuries at or near that intersection. A cyclist was killed there in 2015, DC data shows.

The District Department of Transportation has initiated a Complete Streets project on Wheeler Road to address traffic safety concerns. It’s been in the works since at least 2019. A proposed road diet, pedestrian islands, curb extensions, and automatic traffic cameras are all part of the project, which began this spring’s public input process. A depiction of proposed modifications to the Wheeler Road and Mississippi Avenue intersection, including two bike lanes and a turn lane, is shown in a July 2019 fact sheet. That segment of Wheeler Road is now a four-lane highway.

According to the Watch Commander, the incident underlines the significance of slowing down and being aware of your surroundings as more children walk to school.