An elderly woman harasses two children selling candies outside of Target in California until a man named Jay Lopez confronts her and defends the children. This confrontation was recorded on the phone of another shopper named Andy Lizarraga, says Shaw. 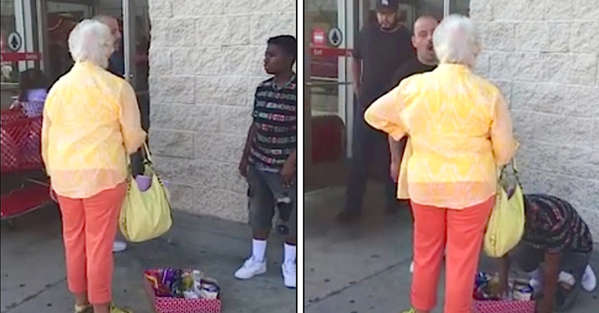 According to Diamond, a young boy and her sister were selling some candies outside Target in Rowland Heights, California when an elderly woman decided to harass them. The woman threatened the children they would be thrown in jail for not having the license to sell. When she started yelling, another shopper, Andy Lizarraga, whipped her phone out and recorded the confrontation. Even when the children started to cry, the woman still did not back down.

However, the woman’s angry outbursts caught the attention of Jay Lopez who just exited the store. Lopez remained calm amidst the woman’s bickering and asked the children how much all the candies cost. The total came out to be $80, then Lopez proceeded to head back to Target to get cash. When Lopez came out, he gave the cash to the boy and handed out the candies freely to everyone around.

Lizarraga, who had recorded the incident on her phone, posted the video on Facebook. She wrote the caption saying, “There are good people and bad people in this world and I saw it firsthand. Screw all you ignorant people who have to complain about something.”

The video got reposted on YouTube and was viewed by nearly 2,000 people. A lot of them were applauding Lopez’s kindness and the children’s tenacity, but most were calling the elderly woman scandalous and should mind her own business.

Lizarraga commented that she only showed the video to friends and family with no intention of going viral, but the people kept on sharing it. When the video went viral, the elderly woman’s daughter requested for it to be taken down. However, the video was already viewed more than six million times on Facebook, Diamond says.