After the thanksgiving break, University of Idaho students back at the University gathered on a Wednesday night for paying tribute to their university buddies who were stabbed to death this month. Kaylee Govcalves, Madison Mogen, Ethan Chapin, and Xana Kernodle was the name of these four students, all between 20 to 21, all were killed on November 13 at the off-campus house of the girls. Gonzalez’s father Steve Gonvalves told to media in a very sad tone ” it is too hard to believe that our daughter never will come back, at this moment we totally numb and trying to handle the amount of the pain.”

he further rememberd the old days with his daughter and her friend ” they called his daughter was so beautiful. they both were best friends since sixth grade when they just found each other first time”.” they shared everything together, they came to our house regularly and completed the whole homework together” he said. he also remembered all things about both of them “they made a super plan to go to regular high school together rather than their charter school, after that, they searched for college together, takes admission to the same college in the same apartment and in the final they died together in the same room and bed. 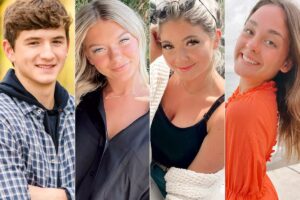 “They are the best friend in the world, both girls love each other very much,” he said ” life is like a long book and in the  present time we stand on our most bad chapter, we must take our justice, we will fight for justice, we figure out this whole case and definitely caught the criminal”

Maddie’s father Ben Mogen said, ” Maddie was our only child, he explained about his daughter ” she was so funny by the nature and she was so nice and humble to everyone. he further talks about the boyfriend of Maddie, who also died in this event “he was a great guy and my daughter find a perfect match and love for her. They treated very well each other. I feel very proud of my daughter and his boyfriend and for sure they would be married someday.

Still, no one is arrested in this case but the investigation is running by the end of the Police. The murder was already planned but we still interrogated all suspected. this town has a population of around twenty-five thousand in around 80 miles and the town did not see a single murder case in the last five years.

A fourth-year student from the same university shares her thoughts about this threatening event  “we are too much concerned about this event, this event falls all the students in some unknown fear. also after this event, we are not feeling safe around the campus and the college and also some of our friends decided to stay at the home after thanksgiving day.